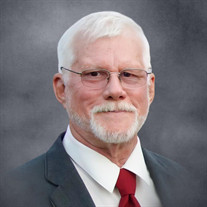 John Ervin was born on December 28, 1947 to Lloyd and Mary Ervin (Piper) in McCook Nebraska. The family moved to Lincoln, MO where John grew up and attended high school at Lincoln High School (’66). Shortly after graduating, John was drafted into the United States Army where he proudly served in the 173rd Airborne while deployed to Vietnam and attained the rank of Sergeant. After his time in service, John attended North Carolina State University where he received a degree In Civil Engineering. John worked numerous projects around both the country and the world, but always maintained ties with family in central and southern Missouri. After “retiring” John and his family worked to develop real estate in Indonesia, before John returned to Bolivar in 2018. John was often found working on his farm in Dunnegan, around his property in Bolivar, or at the auctions where he was always looking for something for the farm. John is survived by his wife Fianti, his sister Alice (Richard), his brother Tom (Bertha), and his children Elias (Janeille), Elliot, Eleah (Niko), Andrew, Brandon, Justin, as well as grandchildren Wyatt, Levi, Keaton, Samantha and Gracelynn. Services for John will be held Sunday, January 16, 2022 at 1:30 PM at the Butler Funeral Home in Bolivar, Missouri. A visitation will be held at 1:00 PM prior to the service. Interment along with military honors will take place at the Lincoln Cemetery in Lincoln, Missouri on Monday, January 17, 2022, at 9 AM. In lieu of flowers, memorial contributions may be made to the Vietnam Veterans of America. A live stream will be available on our Facebook page. Click the link below to take you to the livestream. It will start about 10 minutes before the time of the service. https://www.facebook.com/Butler-Funeral-Home-343584952377066

John Ervin was born on December 28, 1947 to Lloyd and Mary Ervin (Piper) in McCook Nebraska. The family moved to Lincoln, MO where John grew up and attended high school at Lincoln High School (&#8217;66). Shortly after graduating, John was... View Obituary & Service Information

The family of John Ervin created this Life Tributes page to make it easy to share your memories.

Send flowers to the Ervin family.