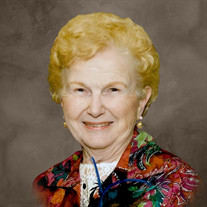 JoAnne Hopkins, 91, passed away in Fair Play, Missouri on the morning of October 27, 2021 while at home with her daughter. She was born JoAnne Harvel to parents Albert and Rose in Bolivar, Missouri on August 1, 1930. She graduated from Bolivar High School in 1948 and attended Southwest Baptist University. She married Bruce Hopkins on February 28, 1950 in a small ceremony in Dunnegan, Missouri. She lived through many exciting historical events in the 20th century including the Great Depression, World War II and the moon landing, but was more focused on raising her three children, Michael Bruce, Linda Ann and Leman Scott. JoAnne and Bruce enjoyed a lot of adventures together. They owned and ran the Fair Play Sale Barn together for over three decades. They owned thoroughbred race horses for several years and on many occasions enjoyed pictures in the winner's circle. JoAnne also owned the Fair Play Swap Meet which is still running today and considered to be one of the oldest in Southwest Missouri. She loved her children, and later on, adored and doted on her grandchildren and great-grandchildren. She was known in the community for being sweet and kind, while also hiding a keen sense of humor. You could often find the Hopkins matriarch keeping the books at the Fair Play Sales and Auction Company or perusing through several novels at the public library. JoAnne enjoyed going on adventures with her friends, watching the family's horses race, Sunday dinners with the family, and Tuesday mornings spent at the Fair Play Swap Meet. She was a believer who was strong in her faith and was also a member of Eastern Star. Joanne has been described as a wonderful, patient woman who never complained and always had a smile. She was a beautiful soul who was greatly devoted to her family. She is preceded in death by her parents Albert and Rose Harvel, husband Bruce Hopkins, half-sister Evelyn Hastain and a grandson Ryan Heath Hopkins. She is survived by her children Mike (Juana Vae), Linda (Kenny Shuler) and Scott (Jeni Bea). Her grandchildren Tiffany Hope (Sam Phillips), Tara Lindsay (Josh Whetzell), Leah JoAnne, Lauren Jill (Danny West), Hailey Jo and Hayden Thomas. Her great-grandchildren Mason Bruce and Jackson Ryan (Tiffany), Kendalyn Jo and Danni Vydalia (Lauren), Kason Michael and Stetson Taylor (Tara). Visitation will be at Butler Funeral Home on Saturday October 30th at 1 p.m., with a service at 2 p.m., followed by a graveside service. In lieu of flowers, the family would appreciate donations to the Bruce and JoAnne Hopkins Fair Play FFA Scholarship.

JoAnne Hopkins, 91, passed away in Fair Play, Missouri on the morning of October 27, 2021 while at home with her daughter. She was born JoAnne Harvel to parents Albert and Rose in Bolivar, Missouri on August 1, 1930. She graduated from Bolivar... View Obituary & Service Information

The family of JoAnne Hopkins created this Life Tributes page to make it easy to share your memories.

JoAnne Hopkins, 91, passed away in Fair Play, Missouri on the...

Send flowers to the Hopkins family.