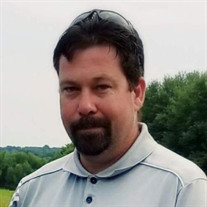 Jerry Joe Evans, Jr., age 46, of Aldrich, Missouri, passed away on March 8, 2021, at his home. He was born May 31, 1974, at Cedar County Memorial Hospital in El Dorado Springs, Missouri, to Jerry Joe Evans, Sr. and Kallie Dean (Sawyer) Evans Hopkins. Jerry grew up in the El Dorado Springs area and graduated from El Dorado Springs High School in 1992. He was saved and baptized at an early age. He attended Southwest Missouri State University in Springfield, Missouri. He was employed at Tracker Boats in Bolivar, Missouri, in 1996. When Tracker Boats was closed down, he went back to school at Ozark Technical Community College in Springfield, earning his Associate of Arts degree and Certifications in Heating, Venting, and Air Conditioning. He worked in the HVAC field for approximately 5 years. When Tracker Boats at Bolivar reopened in 2018, he was asked to return to the Rigging Department and was employed there at the time of his death. Jerry was united in marriage to Carla Rae McDougal on May 9, 1998 and lived in Aldrich until his death. To this union, one daughter, Mekenzie Rae Evans, was born on January 7, 2008. She was the light of his life. Jerry loved the outdoors and living so close to Stockton Lake. He was an excellent fisherman, particularly Crappie and Catfish. He was known for his Fish Fry parties to celebrate his birthday each year. He loved deer hunting in the fall with his buddies. He often went camping with his sister, Jennifer, and other family members and friends. He also loved sports and played football, baseball, and basketball. For many years, he helped coach Mekenzie in summer girl’s baseball and basketball. He and his daughter shared this love of sports. He was an avid Kansas City Chiefs Football fan and celebrated their Super Bowl win with his family. As a tribute to him, the family will wear Chief’s shirts and encourage his friends to join in this tribute at the funeral service. Jerry was preceded in death by his grandparents, Billy Dean and Zella Lee (Simrell) Sawyer, Ruth (Havens) Evans, and several aunts and uncles. Jerry is survived by his father, Jerry Evans of El Dorado Springs; his mother, Kallie Hopkins of Ozark, Missouri; one daughter, Mekenzie Evans of Aldrich, Missouri; one sister, Jennifer (Richard) Rose of Republic, Missouri; one brother, Joshua Evans of El Dorado Springs; his stepmother, Denise Evans of El Dorado Springs; two uncles, Charles Evans of Liberal, Missouri and Jerry Sawyer of El Dorado Springs; one great uncle Junior (Donnis) Sawyer of Stockton, Missouri; several nieces, nephews, and cousins. The family will have visitation and viewing at Butler Funeral Home in Bolivar, Missouri, on Friday, March 12, 2021 from 5:00 to 7:00 p.m. The funeral will be held the following week at Butler Funeral Home on Saturday, March 20, 2021 at 2:00 p.m., with burial at Shady Grove Cemetery, located between Fair Play and Aldrich, Missouri. Pastor Tom Rhodes will officiate the services. Due to Covid-19 concerns and CDC recommendations, the family requests that those attending the services please observe social distancing and also wear masks. The family is establishing a college fund for his daughter, Mekenzie, for those wishing to make memorial donations in lieu of flowers. Pallbearers are Stewart Limbrunner, Ray Spiller, John Park, Joe Petrowsky, Jeremy Wells, and Jay McDougal. Honorary pallbearers are Richard Rose, Charles Evans, Jerry Sawyer, Junior Sawyer, Paul Rose and James Marsten. Funeral Service will be Saturday, March 20th, 2021 at 2:00 P.M. at Butler Funeral Home, with burial to follow at Shady Grove Cemetery, Fair Play, Missouri.

The family of Jerry Joe Evans Jr. created this Life Tributes page to make it easy to share your memories.

Send flowers to the Evans family.