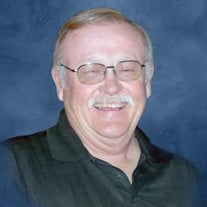 James "Jim" Hocking Richards 73 of Bolivar, Missouri, passed from this life into God's arms on Friday, September 24, 2021, at the VAMC in Nashville, Tennessee. Born Nov. 11, 1947, in Warren, Ohio, he was the third son of Nelson Francis and Helen Porter Richards, both deceased. Raised in Cortland, Ohio, he graduated from Gateway High School in Monroeville, Pennsylvania. He enlisted in the U.S. Navy out of high school at age 17 and was trained as a Corpsman at Camp LeJeune Marine Base in North Carolina. He served aboard the USS Suribachi, an ammunition ship, and was stationed in the Mediterranean during the Vietnam War. He was honorably discharged from the U.S. Navy in Charlotte, North Carolina. He married Sandra Clifton of Charlotte, July 5, 1969, and they celebrated 52 years of marriage. He worked as a manager for General Cinema Corporation before joining the Norfolk, Virginia, police force in 1975 and graduated from the 9th Police Academy as their chaplain. His career spanned four decades serving as a traffic officer in the traffic division and also was a lead investigator of traffic fatalities until he retired in 2005. While on the force, he obtained a BS degree in criminology from Saint Leo University. He is survived by his wife, Sandi, and two daughters, Helen Marie Richards Mayfield, Alaska, and Sarah Richards Jennings (Lt. Col. Harley) of Georgia. He has four grandchildren, James D. and Nathanael Mayfield, and Addison and Lilly Jennings. Jim has three surviving siblings, Rev. Richard Porter Richards (Patti) of Maryville, Tennessee, Susan Richards Toler (Ron) of Asheville, North Carolina, and Randy Leigh Richards (Cindy) of Weaverville, North Carolina. He was predeceased by a brother, William Nelson Richards (Linda) of Montana. He will be sadly missed by his many cousins, nieces, nephews and friends. When asked what his greatest accomplishments were, he replied simply, "Helping raise our two daughters." He was a faithful and active Christian gentleman, actively having served in several congregations and was a member and trustee of The Heights Church in Bolivar. He volunteered at the Citizens Memorial Hospital Cancer Center where he eventually became a patient. With an ever-present smile, Jim loved serving his community in many ways. An avid motorcycle enthusiast, he has an impressive collection of Harley Davidson T-shirts. He was a Sr. Ride Captain of The Patriot Guard and also provided honor guard services for deceased veterans. Until his death, he served as vice president of the Christian Motorcyclists Association. He loved music, especially singing and playing the guitar. He inherited a love of electronics and photography from his father. Rarely was he without the latest computer, phone, iPad, smart watch or camera. The family is grateful to the doctors and staff of the Bone Marrow Transplant Unit at Vanderbilt and VA hospitals in Nashville, Tennessee, and Dr. Leo Shunyakov of Citizens Memorial Cancer Center, Bolivar, for their expertise and compassionate care. A service of sweet celebration will be held at 11:00 AM on Saturday, October 23, 2021 at The Heights Church in Bolivar, Missouri. In lieu of flowers, donations may be made to The Tremain Family Hospitality House of Bolivar or The Heights Church.

James "Jim" Hocking Richards 73 of Bolivar, Missouri, passed from this life into God's arms on Friday, September 24, 2021, at the VAMC in Nashville, Tennessee. Born Nov. 11, 1947, in Warren, Ohio, he was the third son of Nelson Francis and... View Obituary & Service Information

The family of James Hocking Richards created this Life Tributes page to make it easy to share your memories.

Send flowers to the Richards family.