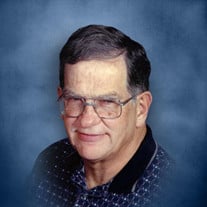 James Keith Carroll, 79, of Bolivar, MO passed away on January 15, 2020. He is survived by his 3 children: David (Paige), Mike (Jill), and Deanna, his grandchildren: Brianna, Kaleb, Micah, Mackenzie, and Makayla and several nieces and nephews. He also leaves behind his 2 sisters: Maxine Rhoades (Sam) and Joan Carroll Glowa. James was preceded in death by his parents Thurman Milford Carroll and Susan Esther Carroll, his wife Joyce Kay Carroll, his brother Thurman Eugene Carroll, his sister Alice Grateke, and his sister Betty Garner. James was born in Lee's Summit, MO and graduated from Lee's Summit high school in 1958. He married Joyce Kay Stith on August 17, 1963 and they were married until Joyce's death on February 8, 2012. After receiving a BS and MS degree from the University of Missouri he also earned a PhD in Biochemistry from the University of Arkansas. James initially worked in the field of animal science. He also served as an adjunct faculty member in Biology at Southwest Baptist University. James moved to Overland Park, KS in 1976 where he and Joyce raised their family. James liked working with his hands. He was a master woodworker and created several beautiful pieces of furniture. He enjoyed his contracting business and using his technical abilities to solve problems and help others. He also enjoyed fishing with his family and friends, playing with his grandchildren, home-made ice cream and any type of candy. He started his plumbing, heating, and air conditioning business known as Carroll Plumbing and Contracting in Bolivar in 1992. Jeff Hobson was a long-time employee who was instrumental in maintaining this business in the Bolivar community. Jeff also provided much support to James and Joyce as they dealt with health issues later in life. James was a devoted husband and loving father. As a Christian, he lived his life in a way that would honor Christ as a Godly example to his children. He was a long-time member of First Baptist Church in Bolivar, MO. James loved helping those in need, often donating his labor to help with home or plumbing repairs. Through the ministry of First Baptist Church in Bolivar, he volunteered to help those who suffered from Hurricane Katrina in 2005. James fought a courageous long battle with Parkinson’s disease. Through all the struggles he never gave up and kept his good sense of humor. He will be missed by his family and friends, but we are comforted knowing he is with his savior Jesus Christ for eternity. The family wishes to thank the staff at Parkview Health Care Facility for their loving care for James the last few years. Visitation will be Monday, January 20, 2020 starting at 1:00 pm with a service following at 2:00 pm at Butler Funeral Home 407 East Broadway Bolivar, MO 65613. In lieu of flowers, memorial contributions can be made to the First Baptist Church of Bolivar.

James Keith Carroll, 79, of Bolivar, MO passed away on January 15, 2020. He is survived by his 3 children: David (Paige), Mike (Jill), and Deanna, his grandchildren: Brianna, Kaleb, Micah, Mackenzie, and Makayla and several nieces and nephews.... View Obituary & Service Information

The family of James Keith Carroll created this Life Tributes page to make it easy to share your memories.

James Keith Carroll, 79, of Bolivar, MO passed away on January...

Send flowers to the Carroll family.