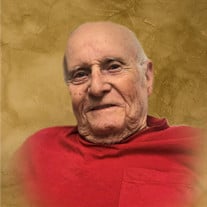 Jack R. Burrell, 85, of Bolivar passed away on Sunday night, February 9, 2020 at Citizens Memorial Hospital in Bolivar. Jack Roger Burrell was born October 12, 1934 to Wesley Hall and Audwene (Boos) Burrell. He was raised Humansville Missouri. Jack met his love, Twila Fern Durnell, in Weaubleau, Missouri. They married on April 8, 1961 and celebrated 58 years of marriage. Jack was a proud Sargent in the Army Reserve Battery B. One of his first jobs was hauling milk for PET Milk Company. Jack and Twila then purchased the Texaco Station in Humansville which they ran for 7 years. After selling the station Jack served as the custodian at Humansville Schools for 28 years, knowing each of his students by name and keeping up with many of them following their graduation. A member of the First Christian Church, Jack professed his faith in October of 1965. Many still today reminisce about Jack’s powerful pitching ability while playing fast pitch softball, which he played well into his 50’s. Jack enjoyed gardening, fishing, and collecting arrowheads as well as going to garage sales and swap meets. Jack never met a stranger, more than anything he enjoyed visiting with people. Jack is survived by his wife, Twila, of Bolivar; his son Jack and wife Pam of Springfield; his grandson, Wesley Burrell and wife, Whitney, and great-grandson, Hudson. A Visitation to honor Jack’s life will be held at Butler Funeral Home in Bolivar on Tuesday, February 11, 2020 from 5:00-7:00 PM. A Graveside Funeral will follow on Wednesday, February 12, 2020 at 1:00 PM at Fairview-Butcher Cemetery North of Weaubleau. In lieu of flowers, donations can be made to the Humansville Schools Athletic Fund (300 N. Oak Humansville, MO 65674). The family wishes to thank the care givers at CMHCF and CMH for their kindness and care.

The family of Jack Roger Burrell created this Life Tributes page to make it easy to share your memories.

Send flowers to the Burrell family.