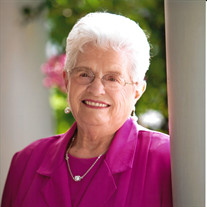 Vauda (Irene) Rush Franklin, went to be with her Lord and Savior July 25, 2019. She was 98 at the time of her passing. Irene was born September 15, 1920, in Louisburg, Missouri to her parents, Roy (Laurel) Rush and Roxana Pearl (Emory) Rush. As the oldest sibling of four children, she enjoyed playing in the creek with her brothers, Emory Dean and James Rush, and taking care of her baby sister, Evelyn Rush while her parents took care of their General Store in Huckaby, Missouri. She attended grade school at Eagle Hill and graduated from high school in 1939 from Urbana, Mo. She was a member of the Glee Club, Home Economics, the girls’ basketball team, along with her Aunt Willette Reser, and she was crowned Homecoming Queen her senior year. After graduating from high school, she worked at her parent’s café and gas station, waiting tables and preparing delicious meals with her specialty being pie baking. Preparing delicious meals became her way to care for and nurture her family, friends, and acquaintances. One of her favorite meals to make was, fried chicken, mashed potatoes, green beans and corn from the garden, homemade hot rolls, gravy, sweet tea, and chocolate pie. Irene’s dream was to become a nurse. She was accepted into Barnes Nursing School, but due to a health condition, she was unable to attend. She continued to work in her parent’s business in Urbana. One day her father hired a “Hard Working” “Handsome Lad” by the name of Amos Franklin. Irene tells the story of Amos helping her clean and close the Cafe, and station after all the truckers were fed, trucks fueled, and tires fixed. She was still suffering from the effects of Bell’s Palsey that had left her with facial paralysis. She tried to hide her face from the new “Handsome Lad Employee”, but Amos told her he only saw how beautiful she was. They were married November 26, 1939. The two of them continued to work together on farms that they purchased in the area. Later, they purchased several businesses with their brother and sister James and Marie (Franklin) Rush, starting with a grocery store, then a feed store and mill. After selling those, they bought a Chevrolet dealership in Urbana, having it for eight years. Looking for something to “retire” to they bought a cattle and hay operation near Goodson, Mo. Irene was a wonderful wife, mother, grandmother, friend and cook. Even though she didn’t pursue a career in nursing, she did nurture and care for many family members and friends throughout her entire life. She attended Lakeside Assembly in Pittsburg, Mo, for many years where she enjoyed the services and fellowship with her church family. She “loved” the music and choir. Her loyal and faithful friend, Neta Jenkins drove her to church and they enjoyed many Sunday dinners together. When asked about her favorite memory, she quickly replied, “When I was Baptized in Lindley Creek at age 12”. Leaving to mourn her passing are her two children, Gary K. Franklin of Kimberling City, Mo and daughter Lauretta Collins and husband James R. Collins of Bolivar, Mo. She leaves eight grandchildren, and 16 great-grandchildren, along with many nieces, nephews, and friends. Visitation for Irene will be Monday, July 29, 2019 from 9:00 to 10:00 a.m. at Butler Funeral Home, Bolivar, Missouri. Services will follow at 10:00 a.m. Burial will be at Pleasant Ridge Cemetery, southwest of Urbana, Missouri. Memorial Contributions may be sent to the Carrie J. Babb Cancer Center Foundation, in Irene’s name.

Vauda (Irene) Rush Franklin, went to be with her Lord and Savior July 25, 2019. She was 98 at the time of her passing. Irene was born September 15, 1920, in Louisburg, Missouri to her parents, Roy (Laurel) Rush and Roxana Pearl (Emory) Rush.... View Obituary & Service Information

The family of Vauda "Irene" Franklin created this Life Tributes page to make it easy to share your memories.

Vauda (Irene) Rush Franklin, went to be with her Lord and Savior...

Send flowers to the Franklin family.