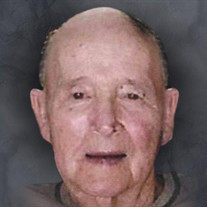 Herman Boyde “Butch” Mincks, age 85, of Bolivar MO, passed away on Wednesday, January 8, 2020, at his daughter's home in Bolivar surrounded by family. He was born December 23, 1934, in Cherry Crest, MO. On April 21, 1958, he married Virginia Denney in Kansas City, MO. Butch joined the Army in 1956 and was stationed in Germany. The night of his return from Germany, he met Virginia. Butch did construction for several years in Springfield, MO before changing his profession. In 1978 he joined his brother Bill at Bill’s Feed in Bolivar and worked alongside Bill, Kenny, and Paul for 34 years before his retirement. Butch and his brother, Paul, hauled many loads of hay and grain from Kansas, Nebraska, and South Dakota. Butch enjoyed car racing (especially Great-Nephew Zach), Playing Cards (pitch was his favorite) and spending time with family and friends. Butch was saved at a young age at the Mt. Edna Baptist Church and was baptized at Jefferson Bridge on Pomme de Terre River. He was a member at Mt. Edna for many years, but later moved his membership to Salem Missionary Baptist Church where his current membership was. Butch was preceded in death by his wife, Virginia; father, Lester Mincks; mother, Eula Mincks; son, Randy Nichols; sisters, Bertha Jarvis, Chestine Ahart, and Rose Kirby; and brothers, Leonard Mincks, Wilard Mincks, Cheslie Mincks, Leslie Mincks, and his twin brother Loyde Mincks. Butch is survived by his very special daughter, Michelle “Shelly” Mincks-Hopkins and her husband Jason, who for the past 6 years devoted her life to taking care of her Daddy. She was the apple of his eye and he was always her Knight in Shining Armor. He is also survived by: daughter, Debbie Stiles and husband Mike; and his very special grandson Jonas Redd who was papa’s pride and joy. When Jonas was younger you would rarely find one without the other. Papa taught Jonas many things at a young age and was a huge impact on making him the man he is today. Other Grandchildren: Kim Segui (Dario), Jeff Stiles, Nicole Boyington (Drew), Nicholas Nichols, Chris Lewis, Kalila Bayer, Stephen Redd (Maria), Levi (Tori) Hopkins, Kylee Hopkins, and Ashley Hopkins; thirteen great-grandchildren; sister Ruth Neal; Brothers Paul Mincks, L. J. Mincks, Kenny (Sue) Mincks, Bill (Emma) Mincks; and many nieces and nephews. Also surviving is Beverly Nichols who was like a daughter to Butch; other relatives; and many numerous friends. A funeral will be held for Butch at 11:00 AM on Monday, January 13, 2020 at The Butler Funeral Home of Bolivar. Friends and relatives are invited to a Visitation with the family one hour prior to the service, from 10:00-11:00 AM at the funeral home. Burial will be held in Bolivar's Greenwood Cemetery. Memorials in honor of Butch may be made to the Polk County Humane Society.

The family of Butch Mincks created this Life Tributes page to make it easy to share your memories.

Send flowers to the Mincks family.