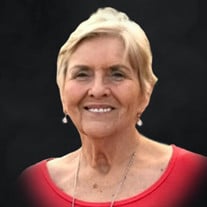 Helen Marie Stephens, 74, passed away on June 24, 2020 at the Parkview Healthcare Facility in Bolivar, Missouri. Helen was born in Kansas City, Kansas on May 15, 1946 and raised in Goodson, Missouri. Her parents were Dean and Mary Lou Fischer Gladden. Helen, her sister Louise, and brother Wayne spent much of their childhood years helping to run Gladden’s General Store. She graduated from Halfway High School in 1964 as class valedictorian, where she was also a cheerleader. She went on to attend Southwest Baptist University and graduated from Southwest Missouri State with a Bachelor’s degree in teaching and home economics. After graduation, she worked as a home economics teacher at Shawnee Mission Northwest High School in Shawnee, KS. Helen had an adventurous spirit and spent six months traveling in Europe with her husband where they visited more than 20 countries. After returning from Europe, she and her husband started Stephens Pharmacy which became a fixture of the community in Bolivar, Missouri. Helen later became a Federal investigator working for the United States Office of Personnel Management in Missouri and California. Helen was baptized at the age of thirteen at Lindley Creek Missionary Baptist Church in Goodson. She was an active member of the PTA in Bolivar and in later years participated in the Beta Sigma Phi women’s sorority. Helen is survived by daughter Mary Helen and husband Erik Jordan of Long Beach, California, daughters Carmen and Nancy of Bolivar, Missouri, daughter Madison Burns and husband Camden of Bolivar, Missouri, and grandchildren Lyla Jordan, Molly Jordan, Zane Stephens, and Colton Burns. Surviving also sister Louise Williams, brother Wayne and wife Jane Gladden, as well as many nieces and nephews. She is preceded in death by her parents, grandparents, niece Kim Williams, brother-in-law Rex Williams, and aunt Ruth Smith. More than anything, Helen treasured her time raising her daughters and grandchildren. Helen will forever be remembered for her unlimited kindness towards her friends and family. Somehow, she always found the perfect present at Christmas-time and birthdays, and was always there for whoever was in need. Visitation for Helen Stephens will be held Saturday, June 27, 2020 from 1:00 PM to 3:00 PM at the Butler Funeral Home in Bolivar, MO. Funeral services will be held Sunday, June 28, 2020 at 2:00 PM at the Butler Funeral Home. Graveside services will be held at Shady Grove Cemetery.

Helen Marie Stephens, 74, passed away on June 24, 2020 at the Parkview Healthcare Facility in Bolivar, Missouri. Helen was born in Kansas City, Kansas on May 15, 1946 and raised in Goodson, Missouri. Her parents were Dean and Mary Lou Fischer... View Obituary & Service Information

The family of Helen Marie Stephens created this Life Tributes page to make it easy to share your memories.

Send flowers to the Stephens family.