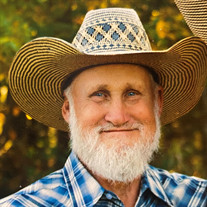 Harold "Tony" Stutenkemper, 72, of Bolivar, MO passed away Sunday, December 26, 2021, at Citizens Memorial Health Care Facility. Tony was born on August 19, 1949, in Polk County, Missouri to Henry and Mary Stutenkemper. He was a lifelong resident of Bolivar, Polk County Missouri where he began his love for farming on the family farm alongside his brothers, and under the guidance of his role model / stepfather, Joe Foster. Tony, alongside his brothers operated the family dairy and cattle farm. You always knew when Tony was in the milk barn because Loretta Lynn, Lynn Anderson or Tony Thornton was on the radio. Which is why Tony fancied himself as an amateur auctioneer. In return, earned his nickname "Tony" later in life, Tony worked for Bill and Louise Hite as a farm hand. From there Tony continued his love for farm work, by working for his brother, David, at Diamond S. Farm and Auction Company. He was instrumental in helping his nephew start what is now Wilkinson Lawn Care. Tony could always be spotted with a handful of Levi Garrett and his blue handled pair of pliers on his hip. Having no children of his own, he never lacked adventures with his nephews and nieces. Tony enjoyed reading Louis L'amour books, watching RFDTV, fishing, and hunting. He also enjoyed the baying of a good beagle and his chickens. Tony is proceeded in death by his parents and stepfather, brothers, John and Bud Stutenkemper. Tony is survived by his sister, Carolyn (Ron) Page, of Halfway, MO; brother, David (Denise) Stutenkemper, of Bolivar, MO; sister-in-law Joyce Stutenkemper, of Bolivar, MO; brother Elvin (Karen) Foster, of Bolivar, MO; niece Amy (Roy) Wlikinson; nephews, Devon (Courtney) Stutenkemper and Cody and Samantha Stutenkemper; nieces, Dakotah (Tyler) Lear , Laura (Josh) Persinger and Terri Lynn (Kenny) Reed; eleven great-nieces and nephews, one great-great-nephew and one great-great-niece. Graveside services will be held 1:30 PM Thursday, December 30, 2021, at the Mt. Olive Cemetery. Visitation will be 12:00 Noon to 1:00 PM at the Butler Funeral Home in Bolivar

The family of Harold "Tony" Stutenkemper created this Life Tributes page to make it easy to share your memories.

Send flowers to the Stutenkemper family.