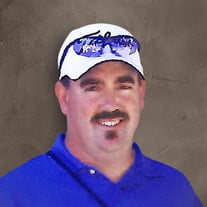 Grant David Cox, 49, of Half Way, passed away on August 28, 2019. He was born in Springfield, MO to Grant L. Cox and Linda K. (Snider) Thieman. Grant grew up in Ash Grove and graduated from Ash Grove High School, and met Erica Florea while still in high school. He went to Labette Community College in Parsons, KS on a baseball scholarship and graduated with an associate degree in Radiography. Grant and Erica married in December 1992, and he worked at several small hospitals in the Joplin and Lamar area before moving to Springfield area hospitals. He received his MRI certification and then moved to CMH in Bolivar in November 2001 and they moved to Half Way in 2002. Grant loved all kinds of music from an early age, but would probably count bluegrass as his favorite. Anyone who had an MRI could listen to music during their scan because Grant instituted that option while at CMH. He was compassionate with patients and well-liked by coworkers. His love for animals was also well known--he loved his dogs, cats and cattle. Grant and Erica bought a farm several years ago and he enjoyed working around with his Angus cattle. He rescued an injured bulldog and she became a project and a treasured pet. An avid gardener, Grant was well known for his abundant sweet peppers. Throughout his life, Grant thoroughly enjoyed hunting, fishing and playing golf. He was a member of the O'Sullivan Lodge in Walnut Grove, Missouri, and was a past Worshipful Master for the Lodge. Grant was preceded in death by grandparents and by a brother, Greg. He is survived by his wife, Erica; parents Howard and Linda Thieman of Greenfield, and Grant and Mary Ann Cox of Springfield; a brother, Ryan Thieman of Arizona, and a sister, Christy Cox of Springfield; several aunts, uncles, cousins, nieces and nephews; and his mother-in-law, Vera Florea, of Bolivar. A Visitation will be held for Grant Cox on Friday, August 30, 2019 from 4:00 – 6:00 PM. at Butler Funeral Home, Bolivar, Missouri. Memorial Contributions can be made to the Polk County Humane Society.

Grant David Cox, 49, of Half Way, passed away on August 28, 2019. He was born in Springfield, MO to Grant L. Cox and Linda K. (Snider) Thieman. Grant grew up in Ash Grove and graduated from Ash Grove High School, and met Erica Florea while... View Obituary & Service Information

The family of Grant Cox created this Life Tributes page to make it easy to share your memories.

Send flowers to the Cox family.