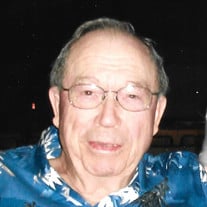 Gervais Howard Payne was born January 16, 1929 in Bolivar, Missouri. Gervais passed away on July 7, 2019, in CMHCF at the age of 90. His parents were Frank Russell and Blanche Orlena Walden Payne. They preceded him in death: his mother in 1984 and his father in 2000. Gervais was the oldest of three children including a brother, Ralph M. Payne, and a sister, Mary Jane Payne Elliott. The family grew and worked under trying times through the dust bowl days of the 1930s. Those days occasioned two trips to California to find gainful employment and a place to live. After several discouraging tries the family settled on a farm near Polk, Missouri where they raised turkeys and cattle. Gervais attended Inglis rural grade school and then Goodson High School. When that school closed, he transferred to Bolivar High School where he graduated in 1947. In the fall of 1941 Gervais was saved under the Gospel at Mt View Missionary Baptist Church at Polk. He joined that church and was baptized and attended there until he moved his membership to Good Hope Missionary Baptist Church in Kansas City. In 1991 he became a member at Calvary Missionary Baptist Church and later, in 2011, he joined Southside Missionary Baptist Church where he remained a good and faithful member until his death. After high school Gervais married Georgia L. Barnes. To this union were born two sons: Lendon Gervais and David Allen. This family was destined to follow in the footsteps of many other young families of the time when after WWII jobs were hard to find. Many efforts in various places were tried for a time but eventually were given up as unsatisfactory. Finally, after ten years Gervais moved his family to Tulsa, Oklahoma where he enrolled in Spartan School of Aeronautics. A fourteen-month course earned him an A & P diploma which enabled him to obtain a good job with Continental Airlines in Denver, Colorado. In less than two years he was able to transfer to Kansas City, Missouri where he finished twenty-five years with the company, retiring in 1984. Leaving Kansas City, Gervais & Georgia moved to the family farm near Polk and began raising cattle. After a few years their son, David, joined them and they worked together for many wonderful years. In 2004 Gervais and Georgia moved to Bolivar where they spent their remaining years. Gervais had a wide range of interests. Throughout his life, from earliest boyhood, he was involved with airplanes. He became a private pilot with several hundred hours of time to his credit. He enjoyed building and flying model airplanes. And for Continental Airlines he spent 25 years repairing and keeping the fleet of planes flying. In addition to that he loved to fish, and he and Georgia traveled thousands of miles in pursuit of the perfect fishing site. In their travel trailer they visited Alaska three times, Nova Scotia, Florida, California, Texas and nearly all states and Canadian provinces in between. Another interest and skill Gervais had was to build furniture and restore antiques as well as remodel numerous homes for family members while enjoying their company. He is survived by his wife, Georgia, of 72 plus years, sons Lendon and wife Marja-Liisa of St.Louis Mo.; David and wife, Ann of Polk, Mo.; two grandchildren, Nicole and husband, Thomas Pettersson; Regin and wife, Jenny Payne all of Stockholm, Sweden: seven great-grandchildren: Amanda, Alexandra and Andreas Pettersson, Samuel, Elías, Julia and Emily Payne, all of Stockholm, Sweden. Also surviving are one brother Ralph and wife Bernice of the state of Montana; one sister, Mary Jane and husband Wayne Elliott of Polk, Mo, one sister-in-law Carole Collins of Cameron, two brothers-in-law, Peter Barnes and wife Bobbie of Odessa, Mo, and Tom Barnes and wife Rita of Cuba, Mo: many nieces, nephews, and friends too numerous to name. Gervais will be missed by all who knew and loved him. Now with our Heavenly Father he is no longer suffering the disabling pain of the last many years and in that his family and friends can rejoice. Funeral Services will be held 2:00 PM Thursday, July 11, 2019 at the Butler Funeral Home. A visitation will be held one hour prior to services from 1:00 - 2:00 PM Thursday at the funeral home. Burial will take place in the Payne Cemetery near Polk, MO. In lieu of flowers, a donation to Payne Cemetery, or the Charity of your choice, will be greatly appreciated. Thank you

Gervais Howard Payne was born January 16, 1929 in Bolivar, Missouri. Gervais passed away on July 7, 2019, in CMHCF at the age of 90. His parents were Frank Russell and Blanche Orlena Walden Payne. They preceded him in death: his mother in... View Obituary & Service Information

The family of Gervais Howard Payne created this Life Tributes page to make it easy to share your memories.

Send flowers to the Payne family.