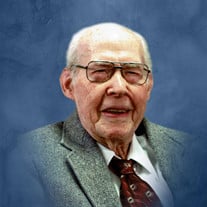 Lloyd George McKinney of Bolivar, Missouri, was born May 21, 1921, in Rombauer, Missouri, to Alonzo Luciene and Elizabeth Captola (Carl) McKinney. He was called home to be with the Lord on August 20, 2019, at the Missouri Veterans Home in Mt. Vernon. George had three brothers, Henry McKinney, Raymond McKinney, Clyde McKinney, and a sister, Edna McKinney Swain, all of whom preceded him in death. George was united in marriage to Ruby Esther Graham on July 28, 1942 at Second Baptist Church in Poplar Bluff, Missouri. George and Ruby marked their 70th wedding anniversary in 2012 with a family celebration. Ruby went home to be with the Lord on April 6, 2013. George was saved and professed Jesus as his Lord and Savior as an adult and was baptized with Ruby in the Black River in 1947. George was a longtime member of Southern Hills Baptist Church where he taught Sunday school for several years and he recently attended Heritage Baptist Church, both located in Bolivar, Missouri. George served in the U. S. Army during World War II. George worked with Ruby when they owned restaurants in Poplar Bluff, Missouri and Greenville, Missouri. They later operated the student union snack bar at Southwest Baptist College in Bolivar, Missouri. George also owned and operated a service station in Bolivar and sold and traded countless cars during his lifetime. George and Ruby were blessed with two daughters, Evelyn J. Peterie and L. Carol Vermillion who preceded them in death. George is survived by son-in-law Jim Vermillion and grandchildren, Kimberly (Enyart) Cunningham and husband Jeff, Todd Vermillion and wife Manda, Jody Enyart, Jordan Vermillion and wife Erica, and Josh Vermillion and wife Krissy. Also surviving are 12 great-grandchildren, six great-great-grandchildren, and numerous nieces and nephews. Services for George McKinney will be held 10:00 AM Saturday, August 24, 2019 at the Butler Funeral Home in Bolivar, MO. Visitation will be held one hour prior to services from 9:00 AM to 10:00 AM at the funeral home. Burial will take place in the Greenwood Cemetery, Bolivar, MO.

Lloyd George McKinney of Bolivar, Missouri, was born May 21, 1921, in Rombauer, Missouri, to Alonzo Luciene and Elizabeth Captola (Carl) McKinney. He was called home to be with the Lord on August 20, 2019, at the Missouri Veterans Home in Mt.... View Obituary & Service Information

The family of George McKinney created this Life Tributes page to make it easy to share your memories.

Lloyd George McKinney of Bolivar, Missouri, was born May 21,...

Send flowers to the McKinney family.