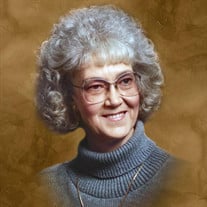 Gayla Lee (Wells) Painter of Bolivar, Missouri passed away peacefully in her home on Thursday, March 10, 2022 at the age of 86. She was born on the 8th day of December 1935. The last remaining child born to Kenneth (Grubby) and Pauline (Brown) Wells. She was saved when she was 12 years old on September 27, 1947 at Slagle Creek Missionary Baptist Church where she remained a member until her death. She attended Bolivar high School and was a member of the Drum and Bugle Core and graduated with the class of 1953. She was a Liberator for life. After high school she attended Draughn’s Business School in Springfield before moving to Kansas City. Gayla was blessed with two children, Roy Dean and Terri Lee. Wanting to raise her kids away from the city, she returned to Bolivar where she remained. She worked at Lily Tulip in Springfield but was gone from her kids more than she liked so she left and went to Teters Floral Products where she worked until 1996 when she retired. She then started her best job yet as Grandma Gee. She loved her grandchildren more than anything else. Besides being Grandma she was their best friend and best taxi driver ever. She spent many hours driving them to preschool, summer school, ball practices, and swim lessons. Most of these trips would end up with them going to McDonalds, her least favorite eating place. You could find her at many various sporting events cheering on her favorite Liberators. When her health started to decline she would always call after to make sure we knew who scored and rebounded and fouled out. She was so proud of all her grandkids. Gayla loved when they would come over to put puzzles together and play games with them. Yahtzee and UNO were her favorites although the kids thought grandma cheated. She made them the best Ramen Noodles and enjoyed eating ice cream sandwiches with them. Gayla is preceded in death by her parents, her sisters, Kathryn Joan Turpin and Peggy June Jarman. Her brother, Kenneth Wells Jr. and her son, Roy Dean Painter. She leaves behind her daughter and son-in-law Terri and Jeff Park and their children, Corey Park, Daiwa and Joe McGuire, Brandon Emmert and Autumn Park. Roy’s children Kenneth (Tyler) and Nathan Painter and their mother, Martha Richey. Three great-grandchildren, the one she held onto to see, James Patton McGuire, Penelope, and Sebastian Park. One sister-in-law, Claudia Wells, of Topeka, KS and one brother-in-law, Allen Jarman, of Raytown, MO. She also leaves a host of nieces, nephews, and many other relatives. Momma and Grandma Gee may be gone but she will never be forgotten. We will see you again. Services for Gayla will be held on Wednesday, March 16, 2022 at the Butler Funeral Home at 1:00 P.M. Visitation for Gayla will be held one hour prior the time of service, starting at 12:00 P.M. Memorial contributions may be made to St. Jude's Children's Research Hospital.

Gayla Lee (Wells) Painter of Bolivar, Missouri passed away peacefully in her home on Thursday, March 10, 2022 at the age of 86. She was born on the 8th day of December 1935. The last remaining child born to Kenneth (Grubby) and Pauline (Brown)... View Obituary & Service Information

The family of Gayla Lee Painter created this Life Tributes page to make it easy to share your memories.

Send flowers to the Painter family.