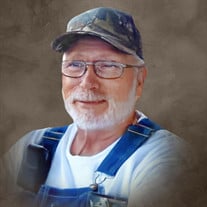 Gary Clyde Sellers was born July 1st, 1941 to Clyde Sellers and Mary Lucinda (Marylou) Greene in Mount Vernon, Missouri. He left this earth early on the morning of September 25, 2020. Not long after Gary was born, his parents moved to Pueblo, Colorado, where Clyde had a job with the railroad. They moved back in the 1950’s and settled in Humansville, Missouri. Gary was a graduate of Weaubleau High School, Class of 1960. Many people in the area knew Gary from the various route delivery jobs he had had over the years, but, Gary enjoyed working for the Poor Boy Tree company for the last several years, even coming out of retirement to help out and do recruiting for the company. He loved to tell stories about the people he met while working disaster relief after hurricanes and big storms. In Gary’s spare time, he enjoyed making handmade knives and other things out of deer antlers. Collecting pocket knives was a big part of the Sellers family tradition and there is probably not very many of his grandchildren or great grandchildren that can say Papa Gary hasn’t given them a pocket knife. He also enjoyed fishing with his buddies and hunting with sons and grandsons. In February of this year, Gary was able to go with grandson, Nick Sellers, to south Texas on a javelina hunt. It was a trip they had planned for 4 generations with Gary, son Tim, Nick and Nick’s son, Wyatt. In the end, only Gary and Nick went. They enjoyed it and were both glad they went. Gary is preceded in death by his parents; father in law, Bill Rotramel; Son, Timothy “Shane” Sellers and Great Granddaughter, Alexia Jade Sellers. He is survived by his wife of 24 years, Joyce (Rotramel) Sellers, a brother Bob Sellers (Annette) of Brighton, Missouri; Son, Todd Sellers (Gaylyn) of Humansville, Missouri; daughter Amy Hubbert (Dan) of Bolivar, Missouri; 2 step-sons, Brad Taylor of Bolivar, Missouri; Rodney Taylor (Rebekah) of Bolivar, Missouri; Daughter In Law, Marie Sellers, of Springfield, Missouri; Mother In Law, Darlene Rotramel; Sister in Law, Wilma Toombs (Glen), of Fair Play, Missouri; Brother In Law, Deryle Rotramel (Donna), of Liberal, Missouri; Brother In Law, Larry Rotramel (Carolyn), of Aldrich, Missouri; Granddaughter, Jessica Yahn (Michael) of Springfield, Missouri; Granddaughter, Lindsay Smith (Quincy) of Springfield, Missouri; Grandson, Nicholas Sellers (Stephanie) of Morrisville, Missouri; Granddaughter, Macy Sellers (Trevor Mead) of Butler, Missouri; Callie Clayton(Ben) of Humansville, Missouri; Tanner Sellers of Flemington, Missouri; Grandson, Garrett King of Bolivar, Missouri; Grandson, Dylan and Dalton Hubbert, of Bolivar, Missouri; Grandson, Jacob Taylor (Kaitlin) of Bolivar, Missouri; Grandson, Bryson Taylor (Serena) of Bolivar, Missouri; Kara Fratzke (Kyle) of Bolivar, Missouri; Dalton Taylor (Abby) of Halfway, Missouri; Kole Taylor of Bolivar , Missouri; 9 Great grandchildren and many nieces and nephews. Gary Clyde Sellers was a kind, compassionate man who would do anything for anyone if they needed a hand. Joyce often says if someone asked him for a dollar, Gary would give them $5. He will be greatly missed by us all. The family would like to express thanks to the staff at Parkview Health Care, CMH Hospice, and the wonderful nurses, doctors and therapists at Mercy Hospital and Mercy Rehab Hospital. Memorial Contributions may be made to the Parkview Health Care Facility or to CMH Hospice.

Gary Clyde Sellers was born July 1st, 1941 to Clyde Sellers and Mary Lucinda (Marylou) Greene in Mount Vernon, Missouri. He left this earth early on the morning of September 25, 2020. Not long after Gary was born, his parents moved to Pueblo,... View Obituary & Service Information

The family of Gary Clyde Sellers created this Life Tributes page to make it easy to share your memories.

Send flowers to the Sellers family.