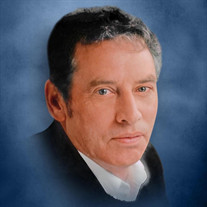 Frederick Clyde “Fred” Kincaid was born December 28, 1942 in Stet, Missouri to James Frederick and Eva Winans Carman Kincaid. He was the oldest of their three children. His siblings were Charles “Chuck” and Carol. Fred passed away October 23, 2020 at his home in Bolivar with his daughter at his side after a hard-fought battle with cancer. Fred grew up in Stet, Missouri and graduated from Stet High School in 1960. He attended Central Missouri State University in Warrensburg for one year and then joined the United States Army. After his discharge, he attended electronics school in Chicago, Illinois. His first job was with AT&T. Fred first met Artemisa Parra Lopez in November 1966. When they met, Artemisa did not speak much English and Fred did not speak Spanish but that didn’t keep them from falling in love. They were married September 30, 1967 in Higginsville, Missouri. They moved to Bolivar, Missouri in 1969. Their only child Eva Maria Kincaid was born January 9, 1973 in Springfield, Missouri. She was, and is, the light of their lives. Fred loved his daughter so much and was very involved in her activities as she grew up in Bolivar. He coached her softball team for many years. He could always be counted on to be watching in the stands at her tennis matches and when she cheered at Bolivar High School and Southwest Baptist University. Fred was delighted to see his family expand when Maria married John William Kallenbach and later when Maria and John became parents to three girls, Elena, Anna, and Dori. “Grandpa Fred” doted on his granddaughters, practicing ball with them, sharing tips about life and recently, teaching all three to drive. Fred had many jobs in his life including being an electrician and selling real estate. For the last 20 years, he worked for his son-in-law John at A-1 Tool Inc. in the shop. Fred was an outdoorsman who enjoyed deer hunting, fishing, and hunting for arrowheads. He loved to travel in the western part of the United States and rarely missed his times of meeting with his buddies for coffee back home in Bolivar. Fred never met a stranger and all those who knew him were blessed by his humor and kindness. After many years of prayer, Fred began attending worship with his wife. It was during a gospel meeting with Walter Buchanan that Fred marched right down the aisle and put on Christ in baptism. From that day forward his sins were washed away and he strove to be faithful to his Lord and Savior. Fred was preceded in death by his mother, Eva, in 1996, his father, Frederick, in 2002, his brother, Chuck Kincaid, in 2014 and his sister, Carol Rose Baggerly, just three weeks ago. He was also preceded in death by his niece, Julie Kincaid, and nephew, James “J. J.” Kincaid. Fred is survived by his loving wife of 53 years, Artemisa, his daughter Maria and her husband John Kallenbach, and granddaughters, Elena and Anna Kallenbach and Dori McRee, all of Bolivar. Fred is also survived by his sister-in-law Clara Kincaid and nephew Scott Kincaid, (Chuck’s family); niece Michelle Carroll and nephew Ronald Radford (Carol’s children); sister-in-law Bernice Schumaker and family, (husband Milburn, children Debbie Haney, Teresa Schumaker, Wayne Schumaker, and Maria Moore); brother-in-law Felix Lopez and family, (children Judy Rico, Victor and Henry Lopez); brother-in-law Gene Lopez; brother-in-law Jose Lopez and family, (wife Ruth, children Roberta, Joseph, David and Sondra Lopez); sister-in-law Louisa Lopez and her daughter Norma Casteneda; brother-in-law Alfredo Lopez; brother-in-law Ricardo Lopez and family (wife Melissa and son Jason Lopez); plus many other nieces and nephews whom Fred dearly loved including Vicky Rhodes, Butch Portell, Keith Portell and Alice Evans (Tomasa’s children). Visitation for Fred will be Tuesday from 1:00-2:00 P.M. at the Butler Funeral Chapel in Bolivar. Funeral Services will follow immediately after visitation at 2:00 P.M. with burial at Greenwood Cemetery in Bolivar. The service will be officiated by John Kallenbach with Bill Bob Kallenbach as song leader. Musical selections will be “We Shall Assemble,” “Give Thanks” and “I Know that My Redeemer Lives.” Scripture reading will be from Psalm 23. Pallbearers will be Rex Austin, Ron Meador, Jack Follis, Mason Painter, Butch Portell and Scott Kincaid. We would like to thank CMH Hospice for providing caring hearts and hands while assisting our family during my father’s last week of life. A special thank you to our nurse Marilynn Teague, Ashley Batson with Social Services, and Aide Sherrie Herbert. Our deepest appreciation for volunteers Christina Walters, Mason Payne, Debbie Martin, and Barbara Brooks who watched over my father vigilantly and also Volunteer Coordinator Melissa Lightfoot, for going above and beyond to give us reassurance and support.

Frederick Clyde &#8220;Fred&#8221; Kincaid was born December 28, 1942 in Stet, Missouri to James Frederick and Eva Winans Carman Kincaid. He was the oldest of their three children. His siblings were Charles &#8220;Chuck&#8221; and Carol. Fred... View Obituary & Service Information

The family of Frederick Clyde Kincaid created this Life Tributes page to make it easy to share your memories.

Send flowers to the Kincaid family.