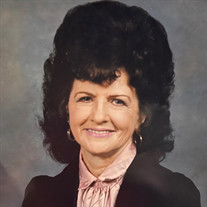 Ella Freda Dickey was born on October 20th 1930 in Tunas Missouri. Freda died June 23rd 2021 in Bolivar. Freda was born to Ellis and Rosa Dickey. Freda attended school at Tunas Mo until the 11th grade when she married Melvin Glor. To this marriage four children were born, Larry, Bobby, Greg and Alan. In 1965 Freda moved to Bolivar and in 1967 Freda married Kenneth Campbell and soon after a daughter, Julie, was born. Freda was a member of First Baptist Church of Bolivar for many years. Freda was a loving mother and grandmother. She didn’t know the word no, when it came to her family. Freda was famous for her ability to cook and bake, most of the time without the aid of a cookbook or measuring devices. She loved flowers and taking care of her yard. She planted flowers and trees every year and took care of her yard until she was 88 years old. Freda didn’t take a lot of big vacations, but every summer she would take her kids to Lake Tapawingo in Blue Springs Mo for a week. Her sister, Juanita, was very gracious and hosted the family every year and its was always a lot of fun. In 1978 Freda, Greg, Alan and Julie visited the Rocky Mountains in New Mexico and Colorado. Then in 1987 she and Greg visited Alan and Janet in Germany and toured Western Europe. Freda worked at Teters Floral Products as a Floral Designer for 15 years then around 1978 she went to work for Litton Industries in Springfield. She worked there for 19 years until she retired. After she retired, she got bored and worked at Norma’s restaurant for another 5 years. Freda was preceded in death by her parents Ellis and Rosa Dickey and her son Bobby Glor. She is survived by her sons, Alan Glor and his wife Janet, Larry Glor and his wife Sandy, Greg Glor and his special friend Dana Harper, and her daughter Julie Sexton. Many grand children and great grand children. Graveside services for Freda will be at 2:00 PM, Friday, June 25, 2021, at Greenwood Cemetery, Bolivar, Missouri.

The family of Freda Campbell created this Life Tributes page to make it easy to share your memories.

Send flowers to the Campbell family.