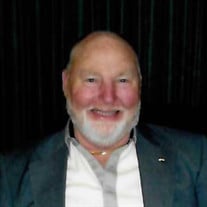 Everett James (Jim) Lynch age 83, of Galmey, Missouri, died Thursday February 11, 2021 at his home. He was born on May 17, 1937 in Sioux City, Iowa, to Glenn and Ida Lynch. Jim married Donna (Davis) Lynch on September 21, 1969. They lived in their home in Galmey, Missouri until her passing. He enjoyed travelling with his wife, playing cards, fishing, golfing, hunting and visiting with friends and family. He was a member of Antioch Christian Church in Pittsburg, Missouri. He served in the United States Navy during the Korean War at Miramar Naval Base and on the USS Lexington. He retired from United Parcel Service. After his retirement, Jim and Donna owned and operated Hickory Grove Resort for eleven years. Survivors include his two sons, Tod Lynch, and his wife Sherri, of Pittsburg, Missouri, and Mike Lynch, and his fiancé Amy, of Jackson, Missouri; three grandsons, three granddaughters and six great grandsons. He was preceded in death by his wife of 45 years, Donna Lynch, his son Rick Lynch and his parents Glenn and Ida. Services will be held 1:00 PM Saturday, February 20, 2021 at the Antioch Christian Church in Pittsburg, MO. Visitation will be held 5:00 PM - 7:00 PM Friday, February 19, 2021 at the Butler Funeral Home in Bolivar, MO. Burial will take place in the Antioch Cemetery following services on Saturday. In Lieu of flowers, donations may be made to the Disabled Veterans Administration or Wounded Warrior Project.

The family of Everett "Jim" Lynch created this Life Tributes page to make it easy to share your memories.

Send flowers to the Lynch family.