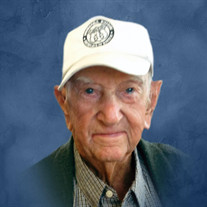 Gene Engledow of Bolivar, Mo passed away November 12, 2019 at Citizens Memorial Healthcare Facility in Bolivar at the age of 106. Gene was born October 7, 1913, the son of Ray Engledow and Elfie Parrott Engledow. He attended Woodlawn School and Bolivar High School. He married his wife of 72 years, Grace Slagle, on January 1, 1936. After marriage, the couple moved to Taft, California. Gene worked as an auto and air mechanic and also opened an air field after receiving his pilots’ license. During WWII, he was on the crew that retrofitted the B-25 bombers flown in the Doolittle raid over Japan. He had the privilege of meeting aviation pioneers Jimmy Doolittle and Chuck Yeager. In 1950, he moved back to Missouri and worked at the GM plant in KC, Whitman Air Force Base, then moved to Neosho, MO where he worked for Rocketdyne until his retirement. He also managed the Neosho airport in the 60’s and ran an aviation service. After retiring he moved back to Bolivar. He rebuilt and restored many airplanes, golf carts, and antique gas engines. He was a HAM radio operator, RV-er, travelling to Oshkosh, Wisconsin annually to the air show and wintering in Arizona or Texas. He loved swap meets and hanging out at the airport. He maintained his pilots’ license and flew his plane on his 100th birthday. The Bolivar airstrip bears his name and his aviation memories have been recorded in the aviation museum in Oshkosh. Gene received the Wright Brothers Master Pilot’s award from the FAA and the Master Mechanic Award. He attended the honor flight in Washington, DC and was honored in Springfield by a flight in the B-25 bomber. He was a member of the United Flying Octogenarians, the Quiet Birdmen, Antique Airplane, Tractor and Gas Engine Associations, and the Experimental Aircraft Association. Gene is survived by two daughters: Carolynn Meadors of Bolivar, Jeannine Franks and husband Mark of Neosho, and three grandchildren: Vicki Lee and husband Roger of Bolivar, Dustin Franks and wife Janell of Carl Junction, and Lindsay Smith and husband Ben of Raleigh, NC, and eight great-grandchildren: Justin Lee and wife Megan of Springfield, Jared Lee of Detroit Michigan, Kaitlynn, Hannah and Emma Franks, Kamryn, Trystan, and Kohen Smith and loving nieces and nephews. He was preceded in death by his parents, his wife, his sister Freda Sterling of Bolivar, brother Wayne Engledow of Bolivar, son-in-law Dale Meadors of Bolivar, and infant grandson Jackie Dale Meadors. Visitation for Gene Engledow will be held Saturday, November 16, 2019 at 10 AM at the Butler Funeral Home in Bolivar, MO. Funeral Services will be held Saturday, November 16, 2019 at 11 AM at the Butler Funeral Home in Bolivar, MO. Burial will be held at Barren Creek Cemetery. Memorial Contributions can be made in Gene's honor to the SOAR Ministries by way of the Butler Funeral Home.

Gene Engledow of Bolivar, Mo passed away November 12, 2019 at Citizens Memorial Healthcare Facility in Bolivar at the age of 106. Gene was born October 7, 1913, the son of Ray Engledow and Elfie Parrott Engledow. He attended Woodlawn School... View Obituary & Service Information

The family of Eugene Clarence Engledow created this Life Tributes page to make it easy to share your memories.

Send flowers to the Engledow family.