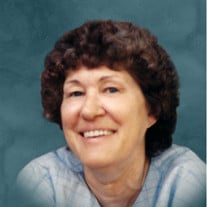 Elizabeth Carolyn “Carol” Hascall entered and left this world on her family farm in Humansville, MO surrounded by her family. Carol was born into a musical family. At the age of four, she started playing with her family, beginning with guitar, later to have her father teach her to play the fiddle. She played the fiddle exceptionally well and made at least a few albums, including the Spotted Pony album, along with appearing on a local radio station and playing in bluegrass festivals. She decided as an adult to make a fiddle, so naturally she began making and even trading fiddles. Carol was a very determined and proud lady. Carol loved her family dearly. She loved to travel and visit family and would often take them to a garage sale (closer to a dozen garage sales) or a rock & gem show. She also enjoyed fishing with her husband Harvey on Bill and Ann’s farm. Carol and Harvey were married on October 17, 1964 in Kansas City, Missouri. The two never had children together but treated their nieces and nephews as their very own. Carol had a way with plants and flowers. She made her plants bloom so beautifully that the Hascall driveway looked like a botanical garden. Carol had a very artistic eye, and she enjoyed making beautiful framed art of her photos, nature, and her arrowhead collection. She collected a great many things, ranging from arrowheads to stamps; from jewelry to rocks and gemstones. All who knew Carol were blessed to have been a part of her photos, hobbies, trips, stories, and her amazing, loving life. Carol is now singing and playing with the angels. Carol is survived by her husband, Harvey Hascall, as well as her sisters-in-law: Mary Crowe, Daisy Thompson and husband Larry, and Margaret Rains, and her brothers-in-law: Bill Hascall and wife Ann, Ray Hascall and wife Juanita, and Johnnie Hascall and wife Janet. She is also survived by numerous nieces and nephews, and a host of dear friends. Carol is preceded in death by her parents, Andrew and Cleo Carnagey Beaty, as well as her infant son, John Andrew. She is also preceded by her brother-in-law Don Hascall, and sisters-in-law Pauline Jenkins and Pansy Harjo. Visitation for Carol Hascall will be held Saturday, November 30, 2019 at 1 PM at the Butler Funeral Home in Humansville, MO. Funeral Services will be held Saturday, November 30, 2019 at 2 PM at the Butler Funeral Home in Humansville, MO. Burial will be held at the Humansville Cemetery. Memorial contributions can be made in Carol's honor to the American Cancer Society.

Elizabeth Carolyn &#8220;Carol&#8221; Hascall entered and left this world on her family farm in Humansville, MO surrounded by her family. Carol was born into a musical family. At the age of four, she started playing with her family, beginning... View Obituary & Service Information

The family of Elizabeth Carolyn Hascall created this Life Tributes page to make it easy to share your memories.

Send flowers to the Hascall family.