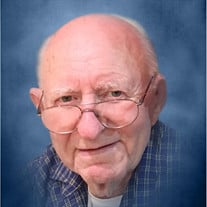 Durward Lee Severns, 85, of Bolivar passed away on Saturday, September 28, 2019 at Colonial Springs Healthcare Center in Buffalo. He was born on October 5, 1933 in Louisburg MO, the son of Chauncey and Lenora (Williams) Severns. Throughout his life, Durward went by many nicknames. Affectionately called “Doodle” by his mother and wife Virginia, he also went by “Lee,” “Whitey,” and to those in Bolivar, “Dude.” He married Virginia L. Sallee in July of 1952. She preceded him in death in 2011. He later married Nancy Myers in April of 2013. Dude was preceded in death by his brother Jim (Pat) Severns of Texarkana TX and survived by his siblings Ron (Kaye) Severns, and Noretta (Gerald) Holt and several nephews and nieces. Dude leaves behind his wife, Nancy; five sons, Don (Beverly) Severns of Jacksonville FL, Darrell (Ruth) Severns of Littleton, CO, Russell (Nancy) Severns of Loxahatchee, FL, Richard Severns of Wright City, MO, and Douglas (Tammy) Severns of St. Charles, MO; step children Sue (Jerry) Cooper of Fair Grove, MO, Joan Sanders, and Dusty (Donna) Hamilton of Warrensburg, MO, numerous grandchildren and great-grandchildren. Dude retired from McDonnell-Douglas (Boeing) in St. Louis in 1989 where he worked on the production of various military aircraft. He managed and coached for many years with Khoury league baseball in Wentzville and was an active member in the Wentzville Christian Church. Friends and relatives are invited to a Visitation with the family from 5:00-7:00 PM , Thursday, October 3, 2019, at the Butler Funeral Home in Bolivar. The Funeral for Durward will be held at 10:00 AM on Friday, October 4, 2019 at Butler Funeral Home. Burial will follow services at Oaklawn Cemetery in Buffalo MO. In lieu of flowers, memorials may be made in honor of Dude to the Alzheimer’s Association.

Durward Lee Severns, 85, of Bolivar passed away on Saturday, September 28, 2019 at Colonial Springs Healthcare Center in Buffalo. He was born on October 5, 1933 in Louisburg MO, the son of Chauncey and Lenora (Williams) Severns. Throughout his... View Obituary & Service Information

The family of Durward "Dude" Severns created this Life Tributes page to make it easy to share your memories.

Durward Lee Severns, 85, of Bolivar passed away on Saturday,...

Send flowers to the Severns family.