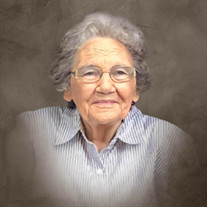 Dorothy Fink (Welsh), 94 of Bolivar peacefully departed this life on June 26, 2021 surrounded by her family. She was a lifelong resident of the Fair Play / Bolivar area. Dorothy was born to Vernie and Earl Welsh on April 11, 1927. She met LaVerne Fink at the fair and married him on August 17, 1946. They were happily married 66 years until LaVerne passed in 2013. This marriage was blessed by the birth of 2 children: Richard Earl and Sharon Kay. Dorothy worked at the garment factory in Bolivar for many years and supported LaVerne in multiple business ventures in the Bolivar area. Dorothy worked hard as a homemaker. Her home was always clean and her yard full of flowers. She definitely had a “green thumb” and flowers and gardens flourished under her care. She was very fond of roses, peonies and red geraniums. Dorothy always signed her cards Grandy and she was the definition of Grand. She had a heart as big as the universe. Dorothy did not like attention on herself but never forgot someone else’s birthday, and all kids were included at birthdays. Dorothy never forgot a holiday, she enjoyed sending cards and her favorite holiday was Christmas. She loved wrapping gifts and was very detailed. Everything had to match, including the bows, and she was well known for her usage of scotch tape. Dorothy installed many lifelong values in her children, grandchildren and great grandchildren about love, hard work, honesty and respect for others. Dorothy is preceded in death by husband LaVerne, her parents Vernie & Earl, one sister Evelyn Anderson, Brother-in-law Oscar, Son-in-law Larry and Grandson Brian Sawyer. Dorothy is survived by her children: Sharon Sawyer and Richard (Geraldine) Fink. Grandchildren Ronda (Rob) Riden, Terri (Mike) Rash, Kevin (Kayla) Sawyer. Great grandchildren: Cody (Bailey) Rash, MaKayla Rash, Randy Riden, Wylee and Nora Sawyer. Great great grandchildren: Riley & Rowdy Rash Services for Dorothy will be at 11:00 AM, Thursday July 1, 2021, at Butler Funeral Home, Bolivar, Missouri, with visitation from 10:00 to 11:00 AM. Her Grandchildren and Great grandchildren will be pallbearers. Eternal resting place will be beside her husband in Greenwood Cemetery in Bolivar.

Dorothy Fink (Welsh), 94 of Bolivar peacefully departed this life on June 26, 2021 surrounded by her family. She was a lifelong resident of the Fair Play / Bolivar area. Dorothy was born to Vernie and Earl Welsh on April 11, 1927. She met LaVerne... View Obituary & Service Information

The family of Dorothy Fink created this Life Tributes page to make it easy to share your memories.

Send flowers to the Fink family.