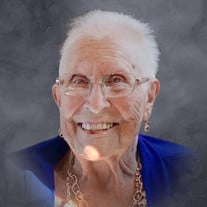 Doris Jean Haskell Spainhower, 91 of Bolivar, Missouri, passed away peacefully on Saturday, February 19, 2022, at her home in Bolivar surrounded by her family. She was born on May 7, 1930, in Clinton, Missouri, the daughter of Floyd Allen Haskell and Mamie Ruth Bradford Haskell. After completing high school, Doris began nursing school, and spent many years caring for others as a nurse. Doris was a member of Bolivar United Methodist Church where she taught Sunday school for many years. In her free time, she loved horse racing, crafts, and spending time with her family. She is preceded in death by her parents, Floyd and Mamie Haskell; Her husband Lou Spainhower; One brother, Floyd Haskell Jr., and her son in law, Lon Graves. She is survived by her only child, Paula Graves of Morrisville and four granddaughters, Amy (Des) Hoorn of Kentucky, Sarah (Tim) Choate of Bolivar, Megan (Jason) Morrison of Salisbury, Missouri, and Buffy (Jason) Starkey of Junction City, Kansas, Her great grandchildren; Dawson, Ezekiel, Carson, Rowan, Alina, Finley and Haskell, with a new one due in July, and One brother, Dan Haskell of Blue Springs, Missouri. The family would like to express a big thank you to Doris’s good friends, Barbara Chappell, Lindsey Godfrey, and Linda Dawes along with a very special thank you to Seasons Hospice for the love and support. Per her wishes, a private graveside service will be held later at Mt. Gilead Cemetery in Bolivar. In lieu of flowers, Donations may be made to Seasons Hospice or to the Polk County Humane Society.

Doris Jean Haskell Spainhower, 91 of Bolivar, Missouri, passed away peacefully on Saturday, February 19, 2022, at her home in Bolivar surrounded by her family. She was born on May 7, 1930, in Clinton, Missouri, the daughter of Floyd Allen... View Obituary & Service Information

The family of Doris Spainhower created this Life Tributes page to make it easy to share your memories.

Send flowers to the Spainhower family.