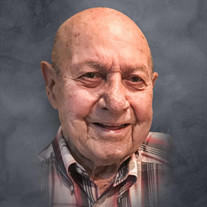 Donald E. Wilson, 87 years old, passed away on January 19, 2021 at his home in Springfield, MO. He was the husband of Rowena (Roweton) Wilson. They shared 45 years of marriage together. Donald was born in Chilhowee, MO on March 23, 1933 to Bert and Ruby Mae (Riley) Wilson. He graduated from Norris High School. He was employed at the American Can Company in Kansas City, MO as a production mechanic/supervisor, retiring after 37 years of service. He was a member of The Rising Sun Masonic Lodge and the International Association of Machinists and Aerospace Workers. Donald served as a sergeant in the US Army. Donald had a love for the outdoors; boating, fishing, mushroom hunting and teaching his grandchildren to water ski. He enjoyed bowling, traveling, playing cards and attending bluegrass festivals. He was musically talented and had a natural ability to play any song just by ear. He had been given the nickname “golden fingers” because of this talent. He will be remembered for his humor and kind and loving ways. He loved his family deeply and enjoyed spending time with them. His face lit up any time a grandchild or great-grandchild entered the house! He is preceded in death by his parents, Bert and Ruby Wilson; 2 brothers, Gene Wilson and Floyd Wilson; 2 sisters, Dorothy Robinson and Mabel Hurd. Donald is survived by his wife, Rowena Wilson; 2 sons, Raymond Wilson and Delayne (Lisa) Wilson; 2 daughters, Becky Ownby and Rhonda James; 9 grandchildren, Aaron (Lauren) Wilson, Megan Wilson, Patricia (Aaron) Dufner, Steven (Beka) Wilson, Ashley (Kevin) Kellison, Whitney (Austin) Ryker, Courtney (Colt) Pruente, Amanda (Louis) Bridges, Jacob Kissell; 11 great-grandchildren, Lillian Wilson, Harris Wilson, Mary Dufner, Barrett Dufner, Forrest Wilson, Rosie Wilson, Camden Gatewood, Kloe Kellison, Mason Kellison, Olivia Ryker, Rowyn Pruente; along with numerous nieces, nephews and friends. Visitation will be on Saturday January 23, 2021, from 10:00 AM to 11:00 AM at Butler Funeral Home in Bolivar, Missouri with the funeral service starting at 11:00 AM. Burial will take place in Reed Cemetery, Halfway, MO. In lieu of flowers, the family requests donations be made to the Alzheimer’s Association or to the Polk County Senior Center.

Donald E. Wilson, 87 years old, passed away on January 19, 2021 at his home in Springfield, MO. He was the husband of Rowena (Roweton) Wilson. They shared 45 years of marriage together. Donald was born in Chilhowee, MO on March 23, 1933 to... View Obituary & Service Information

The family of Donald E. Wilson created this Life Tributes page to make it easy to share your memories.

Send flowers to the Wilson family.