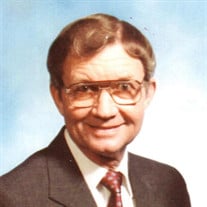 Dean W. Brim, longtime resident of Polk County, MO passed away on July 8, 2020, at the age of 87 at his home. He was born December 28, 1932 at Bolivar, MO to Roy and Ermal Weese Brim. Grandparents were Edgar H. Brim and Cordelia Brim, and Arthur and Minnie Weese. He was saved as a young boy at Mt. Olive Missionary Baptist Church, Bolivar. He was married August 4, 1956 to Jane Ann Turner at Cassville, MO. To this union, two children were born, Robert Lee and Karen Dee. He was preceded in death by his parents, his grandparents, his mother and father-in-law, Jimmy and Virginia Turner of Cassville, MO and his sister-in-law and her husband, Missie Kay and Eddie Moore of Tulsa, Oklahoma. He is survived by his wife of 63 years, son Robert Brim, daughter Karen Stillings and husband Dave; grandsons Brady Gifford and his wife Brittany, Josh Gifford, Tyler Brim; granddaughters Shyann and Sierra Brim; and great grandson Holden Dean Gifford. Also surviving is his brother in law Jim Turner and wife Sue of Texas. He was a 1951 graduate of Bolivar High School. He had an intense interest in big band music, played the trumpet and made the Bolivar High School Band and the Southwest Baptist College Orchestra as an eighth grader. He graduated from the University of Missouri in 1955 with a BS in Agricultural Education where he was a member of Alpha Tau Alpha and was a member of the University Concert and Marching Band. He would often comment that maybe he should have majored in music. His passion, however, was in agriculture. He taught Vocational Agriculture at Archie, MO and later taught Science and was Principal of Halfway High School. Following teaching, he was involved in various aspects of farming, raising hogs, beef cattle and milking Holstein dairy cows for over 30 years. He owned and operated his own Real Estate business as a broker, developed several subdivisions and supervised the building of at least 200 homes. He was a hard worker and loved a good challenge. He told us kids and the grandkids many stories of his childhood, and things he had done in his adult life. He'd say "I've had a lot of fun in my life." He offered much wisdom and advice and was always there to help in any way he could. He had been a member of the Mt. Olive Cemetery Association for 50 years, serving as Vice President. He had been a member of the First Baptist Church, Bolivar. At Dean's request and according to Genesis 3:19 "For you are dust and to dust you shall return", the body has been cremated. Memorial services will be held at Mt. Olive Cemetery, Bolivar, MO on Monday, July 27, 2020 at 10:30 a.m. In lieu of flowers, the family requests donations be made to the Mt. Olive Cemetery in care of Butler Funeral Home or may be sent to the Mt. Olive Treasurer at 1740 E. 552nd Rd, Brighton, MO 65617.

Dean W. Brim, longtime resident of Polk County, MO passed away on July 8, 2020, at the age of 87 at his home. He was born December 28, 1932 at Bolivar, MO to Roy and Ermal Weese Brim. Grandparents were Edgar H. Brim and Cordelia Brim, and... View Obituary & Service Information

The family of Dean W. Brim created this Life Tributes page to make it easy to share your memories.

Send flowers to the Brim family.