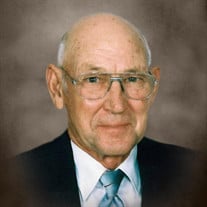 Mr. David John Dunseth, age 96, of Halfway, died Thursday, April 8, at Maranatha Village in Springfield after a short illness following a hip fracture. He was born on September 10, 1924 in Halfway, the son of Harry Dunseth and Eunice Schick Dunseth. David was gravely ill as a baby. He was suffering such pain that he couldn’t be held. The only rest he found was on a soft, feather pillow. Eunice said he was only skin and bones when he recovered. He never crawled, but started walking at nine months. In the fall, when David was eight years old, he helped his mother take food to some sick neighbors. He drank from their water dipper out by an old well, and later he came down with typhoid fever. He was sick most of that winter and lost a year of school. Once again he was skin and bones and had to learn to walk again. David was saved as a teenager during a revival at Schofield and was baptized in Hominy Creek. He was a member of Schofield Missionary Baptist Church the rest of his life. He graduated from Halfway High School in 1943. One of his happiest days was Senior Sneak Day when his class skipped school and the group spent the day together. His favorite classmate was a girl named Rosie Voris. They were married on August 9, 1950. David was an army veteran serving in Korea after World War II and before the Korean Conflict began. Above all else, David was a farmer. He milked cows for over 25 years and then was a beef producer. He said he felt his best when he was on a tractor. Last summer, at age 95, he was still helping in the hay fields. He was a tireless worker. He would work in the fields during the day and then work in his garden until dark. He grew long rows of strawberries, blackberries, and grapes. His greatest joy was taking cantaloupe, watermelon, and sweet corn to his friends and neighbors. David was preceded in death by his parents; his wife Rosie in 2014; his sisters-in-law Barbara Dunseth, Ruth Gallivan, and Pat Voris; his brothers-in-law David Gallivan and Paul Voris. He is survived by one son, Dale Dunseth and wife Marilyn, of Halfway; one granddaughter, Sara Coffman and husband Lance, of Halfway; one grandson, Craig Dunseth and wife Jenna, of Bolivar; five great-grandsons, that he was extremely proud of, Les and Leo Coffman, and Charlie, Jack, and Sam Dunseth; one brother, Donald Dunseth, of Halfway; a sister-in-law, Eva Voris, of Bolivar; brothers-in-law Lendell Voris of Halfway and Buster Voris and wife Barbara, of Walnut Grove. Paul Dunseth, Jerry Gallivan, Robert Gallivan, Bob Voris, Bud Voris, Paul Raymond Voris, and Randy Voris will serve as Pallbearers. Ben Gorden, Richard LeJeune, Brian McDaniel, Jim McDaniel, Dean Voris, Morris Westfall, and Lloyd Steinshouer will be recognized as Honorary Pallbearers. Funeral services for David will be held 2:00 PM Sunday, April 11, 2021 at the Butler Funeral Home in Bolivar, MO. Burial will take place in the Schofield Cemetery in Halfway, MO.

Mr. David John Dunseth, age 96, of Halfway, died Thursday, April 8, at Maranatha Village in Springfield after a short illness following a hip fracture. He was born on September 10, 1924 in Halfway, the son of Harry Dunseth and Eunice Schick... View Obituary & Service Information

The family of David Dunseth created this Life Tributes page to make it easy to share your memories.

Send flowers to the Dunseth family.