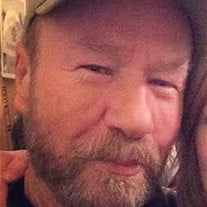 Dale Alan Robbins, 67, of Flemington passed away Friday, November 8, 2019, just two days shy of his 68th birthday. Dale was born on November 10, 1951 in Omaha, NE; the son of Howard and Arline Andresen Robbins. He was united in marriage to Shari Mueller on July 5, 1974 in Omaha. She survives. Also surviving is his father, Howard; two children, Jennifer Connor of Omaha, NE and Dustin Robbins of Porter, TX; two grandchildren, Ryan Connor and Joselyn Jackson; two brothers, Larry (Kim) Robbins of Cookson, OK and Joe (Joan) Robbins of Elkhorn, NE; and many nieces and nephews. He was preceded in death by his mother, Arline. Dale’s interests included family, outdoor activities, hunting, motor cycling and boating. However, one of his greatest interests, which he turned into a career, was woodturning. Having worked with wood most of his life, Dale turned from custom remodeling to become a Master Artisan of woodturning. Using his custom built lathe - one of the biggest in the nation - Dale turned pieces of burled wood into dynamic sculptures, each one as unique as the man who crafted it. His mastery of the art earned him much acclaim. In addition to selling his pieces all over the world and fine arts shows, Dale was featured on TV and in woodworking magazines. He was also a member of the American Association of Woodturners, serving as past President of the Omaha Chapter. “My intent as an artist is to explore and release the natural elements contained in a beautiful piece of figurative solid burled wood. The innate character of the wood inspires the imagination and lifts the spirit. The goal is to share the beauty of nature with the viewer.” ~Dale Robbins Friends and family will Celebrate Dale's Life at 4:00pm on Saturday, November 30, 2019 in his home. Memorial Services will also be held in Omaha, NE at a later date. In lieu of flowers, memorial contributions may be made to the Carrie J. Babb Cancer Center.

Dale Alan Robbins, 67, of Flemington passed away Friday, November 8, 2019, just two days shy of his 68th birthday. Dale was born on November 10, 1951 in Omaha, NE; the son of Howard and Arline Andresen Robbins. He was united in marriage to... View Obituary & Service Information

The family of Dale Alan Robbins created this Life Tributes page to make it easy to share your memories.

Send flowers to the Robbins family.