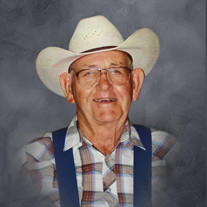 Coy Cooper Jr., 91 Passed away on December 18, 2019 in Bolivar, MO. He was born in Needmore, MO on September 19, 1928 to Coy Cooper Sr. and Bessie Gothard Cooper. He married the love of his life, Donna Lee Fisher, on November 22, 1949. They recently celebrated their 70th wedding anniversary. He served in the United States Navy in 1948 and 1949 aboard the USS Rogers. Upon returning from the Navy he farmed in MO before moving to Wichita, KS in 1951 where he worked in aircraft and farmed. The family lived in KS until 1971 when they moved to Bolivar, MO and purchased their farm. Coy then spent the rest of his life farming. He raised beef cattle and hogs and operated a dairy. He also loved cutting and baling hay. He was a member of the Mt. Olive Baptist Church for 48 years. There he served as an ordained deacon and in various other capacities. He was preceded in death by his oldest son, Rick, his four brothers and parents. He is survived by his loving wife, Donna, his children, Kathy (Mike) Afton, Jeff (Geni) Cooper, Lesa (Eddie) Crain and his late son’s wife, Della Cooper, 13 grandchildren, and 22 great-grandchildren with 3 more on the way. The family will be present for visitation at Mt. Olive Baptist Church, from 10-11 am on Saturday, December 21st with funeral service following at 11:00 am. Memorial donations may be made to Mt. Olive Baptist Church at 4079 Highway D, Bolivar, MO 65613.

The family of Coy Cooper Jr. created this Life Tributes page to make it easy to share your memories.

Send flowers to the Cooper family.