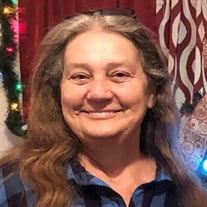 Connie Lynn Maggard was born July 17, 1961. She is the daughter of Billy and Silva Garrison and Richard Dodd. On November 5, 1977 she married her childhood sweetheart, known as the “cute boy next door”, named Mickey as she would smile and say! To this union three beautiful children were born. Michael Jr, but to her was little Mickey, a daughter Christy, and last but not least her baby boy Brandon, and she always reminded us that Branden was in fact the baby. Connie only had three children that she brought into this world, but she had several bonus kids and she took much pride in being “Mom to all”. She prided herself in being family, she was a sister, an aunt, and a great aunt. She loved each and every one of her brothers and sisters and nieces and nephews. But ultimately, her all time favorite title was Granny. She was blessed with six very handsome grandsons, Bradley, Michael III, Travis, Riley, Colby, and Connor. Her eyes lit up at the mention of those boys. She was always their biggest fan and number one supporter. Connie always joked that if she knew grandkids were so much fun, she would have had them first! Her newest title and blessing really stole the show, Gi Gi. She got her great-grand baby girl, Piper. Her family was everything to her and her love for each and every one of us was shown and made clear. Connie was a straight forward and tell it like it is kind of woman. She came from a long line of these types of women. Her smile was infectious, her heart was pure gold, and her laughter was contagious. Definitely a life well lived! Her memory will live on in the hearts of many and she left all of us several memories to hold onto! Connie is survived by her husband of 44 years, Mick Maggard Sr.; her oldest son, Mick Maggard Jr. and his wife Pam; her daughter, Christy Maggard; her youngest son and as she would say, my baby, Brandon Maggard; six grandsons; one great-granddaughter, three brothers and three sisters; and numerous nieces, nephews, friends, and dear family

Connie Lynn Maggard was born July 17, 1961. She is the daughter of Billy and Silva Garrison and Richard Dodd. On November 5, 1977 she married her childhood sweetheart, known as the &#8220;cute boy next door&#8221;, named Mickey as she would... View Obituary & Service Information

The family of Connie Maggard created this Life Tributes page to make it easy to share your memories.

Send flowers to the Maggard family.