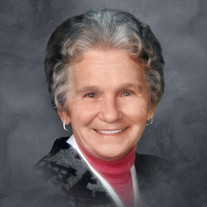 Cleo Mae Boyle, 94 of Humansville, Missouri, passed away on Tuesday, December 1, 2020 at The Truman Lake Manor Care Center in Lowry City, Missouri. She was born on September 3, 1926 to Carl and Lola Dennis, one of nine children. From a young age, she began working at home to help take care of her family. As a young lady, Cleo met Nolan Boyle, her “Cowboy”. Cleo and Nolan were united in Marriage on November 1, 1942. To this marriage, two children were born: Donald and Joyce. Mae lived and worked for several years with Nolan in the Kansas City area before moving to Humansville in 1976, where she helped operate a shop with Maxine Nifert. In 1987, Mae and Nolan opened a shop in Weaubleau called “Poor Girls and 1 Poor Boy Antique. They continued to operate the shop for 22 years. Mae was active in the community, helping with the restoration of the Humansville Community Building, and working alongside her husband with the building/creation of the Veteran’s Memorial Park in Weaubleau. Mae enjoyed crochet, quilt making, cooking, reading westerns, and spending time with her family. She liked telling stories about life, and loved the laughs she would get from telling them. During the last 3 years, Mae spent her time at Truman Lake Manor where she enjoyed reading, playing bingo and hassling the staff. Mae was well liked, and loved being called “Grandma” by everyone. She is survived by her daughter Joyce Hughes, son Donald Boyle and his wife Jan, One granddaughter, JoeDona Schussler, 4 grandsons, Larry Dean Walters, and his wife Selena, Michael Walters and his wife Keri, Donnie Joe Boyle and his wife Sherry, and Terry Boyle. Graveside services will be held at the Humansville Cemetery on Friday, December 4, 2020 at 1:00 PM with Greg Magnum officiating. In lieu of flowers, memorial contributions may be made to the Veteran’s Memorial Park in Weaubleau. Services are under the care and direction of Butler Funeral Home of Humansville.

Cleo Mae Boyle, 94 of Humansville, Missouri, passed away on Tuesday, December 1, 2020 at The Truman Lake Manor Care Center in Lowry City, Missouri. She was born on September 3, 1926 to Carl and Lola Dennis, one of nine children. From a young... View Obituary & Service Information

The family of Cleo Mae Boyle created this Life Tributes page to make it easy to share your memories.

Cleo Mae Boyle, 94 of Humansville, Missouri, passed away on Tuesday,...

Send flowers to the Boyle family.