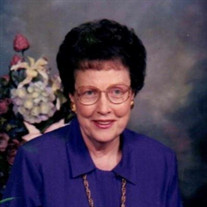 Charlotte Bone, 84, formerly of Vandalia, Illinois, passed away on March 1, 2020 at Parkview Healthcare Facility in Bolivar, Missouri after health complications. Charlotte was born on February 25, 1936 to William Yarbrough, Jr and Lois McWhirter Yarbrough in Ramsey, Illinois. After graduating from Vandalia Community High School in 1955, she joined her husband in Germany where he was stationed while serving in the army. After returning from Germany, they went on to have three children, Steve Bone of Bolivar, Missouri, Pam Bone of Fort Worth, Texas and Connie Tweedy (Kerrick) of Bolivar, Missouri. Charlotte was an out-going, loving and kind person. She greeted others openly with a warm smile on her face. Being around family brought her joy and she took pride in making them many special meals and sewing clothes for her children when they were young. After her children were grown, she spent many weekends socializing at local dances and twenty years serving the public in her role at Hardee’s in Greenville, Illinois as well as Burger King and Wendy’s in Vandalia, Illinois. Before moving to an assisted living facility in Bolivar, Missouri in 2012 to be near family, she was an active member of Bethel Baptist Church in Vandalia. Charlotte was preceded in death by her parents and step-mother Sally Yarbrough, her older brother Maurice Yarbrough and brother-in-law George Davison. She is survived by her sisters, Shelby Lawler (Larry), Shirley Davison, Georgia Krause (Roger), Tanya Jackson (Dallas); her three children; her three grandchildren Katlyn Stephens (Jordan) of Bolivar, Missouri, Kyla Fish (Jake) of Newton, Kansas, Kyle Tweedy serving as a Peace Corps Volunteer in Liberia, West Africa and three great-grandsons Baylor Stephens, Boston Stephens and Fletcher Fish as well as numerous nieces, nephews and cousins. Funeral Services will be officiated by Joe Lawson at 1:00 pm, Saturday, March 7th at Bethel Baptist Church in Vandalia, Illinois. Interment will immediately follow at Fairlawn Cemetery in Vandalia. Visitation will be at Hohlt & File Funeral Home from 5:00-7:00pm Friday, March 6th. Memorial contributions in honor of Charlotte’s life may be made to Bethel Baptist Church Vandalia, Illinois.

The family of Charlotte Bone created this Life Tributes page to make it easy to share your memories.

Send flowers to the Bone family.