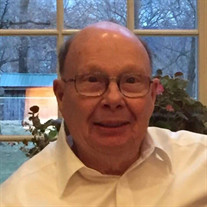 Charles Whitaker, beloved by family and friends, died in the hospital on Thursday, September 16, 2021, from Covid-19. He was a very healthy 77 years old and had no underlying health conditions. Charles resided in Bolivar, Missouri. Charles was born Charles Frederick Whitaker on April 30, 1944, in Burbank, California, to parents Fred Whitaker (originally of Nebraska) and Esther Louise Albright (originally of Kansas), both deceased. Charles’ sister, Harriet Sartinsky, and her son Michael are also deceased. Charles is survived by his brother, Larry E. Whitaker of Forest, VA; his niece, Yvonne Whitaker Seman of St. Robert, MO; two nephews, Cris Whitaker of California, and Chad Whitaker of North Carolina. Although Charles never married, he found family warmth in family and friends. Charles’ loyalty and service to his God and church family and the reciprocity he received, helped provide him with a comforting family atmosphere. His early education was spent in K-8th grades at Village Christian School and 9-12th grades at Culter Academy in Los Angeles. Charles graduated on the Dean’s List and Phi Beta Kappa from University of Southern California with a Master’s degree in English. Later he put his education to good use teaching at a high school in New Zealand (where he lived for almost 10 years). Charles also taught high school in Needles and Glendale, California. Following his teaching career, he completed schooling in computer programming. Charles was later employed at Farmers Insurance in California. Eventually he moved to Bolivar, Missouri, where he continued working for Farmers as a semi-retired consultant. From adolescence he was a bashful but very accomplished pianist playing more difficult pieces as the years passed. As educator, researcher, and author of biblical subjects, he always insistent that the truth of the Bible be taught rather than the traditions of men. Charles was a charter member and on the board of directors of the Church of the Great God for almost 30 years. To his family and friends, Charles was witty, and one never knew when one of his precise quips would emerge. His subtle humor always seemed to carry a depth of wisdom and practicality. For many decades, he served God by teaching and travelling great distances to visit the sick and lonely. He was very generous with his time and effort. Charles was always willing to serve others in any way he could. His heart was in the work of God at every opportunity. He will be greatly missed by the many whose hearts were touched by him in his loyal service. Cards and letters may be sent to: Whitaker Family, c/o Church of the Great God, PO Box 471846, Charlotte, NC 28247-1846 A graveside memorial service will be hosted on Sunday, October 31, 2021, at 2 PM at Akard Cemetery at the end of 31 Road South of Fair Play, MO and is directly across the street from 4347 So, 31 Road, Fair Play 65649, MO.

Charles Whitaker, beloved by family and friends, died in the hospital on Thursday, September 16, 2021, from Covid-19. He was a very healthy 77 years old and had no underlying health conditions. Charles resided in Bolivar, Missouri. Charles... View Obituary & Service Information

The family of Charles Whitaker created this Life Tributes page to make it easy to share your memories.

Charles Whitaker, beloved by family and friends, died in the...

Send flowers to the Whitaker family.