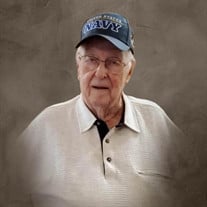 Charles Edwin Johnson age, 94, passed away early morning Thursday, February 27, at Mercy hospital in Springfield. He was the third of four children of Luther J Johnson and Annalee (Graham) Johnson, having been born August 8, 1925 southeast of Bolivar in Polk County. He had been a resident of MO Veterans Home at Mt Vernon, MO since September 2019. Charles attended Leith rural grade school and graduated from Bolivar High School in 1943. Following graduation he was drafted into US Navy serving until the end of World War II. Upon return from the Navy he began a dairy farm operation at the family farm with his dad and later became a federal meat inspector retiring in 1994. Charles married Virginia Lee Fittro on October 24, 1946 and they were married 46 years before Virginia passed away on February 16, 1992. Charles grew up attending Bolivar First Christian Church where he was baptized. He was an active member and served as an Elder, Trustee and later became Elder Emeritus. He enjoyed horseback riding and trail rides- but his favorite hobby was fishing. Charles was a staunch Democrat and served as a County Committeeman for a number of years. He was a member of the Howard T Keeling American legions Post 138. Preceded in death by his wife Virginia Lee Johnson, parents Luther and Annalee Johnson, a sister Dorothy Nease and Brothers Farrel and Robert Johnson. Surviving are three nieces, Sharon Black and husband Joe of Portland, OR, Cynthia Goefft and husband Mike of San Anselmo, CA, Roberta Doke and husband Jim of Brighton, Mo. Six great nephews and nieces, Monica Blakeslee Kish and Trent Blakeslee of Portland, OR, Hannah and Lucas Goeftt of San Anselmo, Ca. , Jamie Crocker of Wellington, FL, Jennifer Byrne and husband Barry of Bolivar and Jay Robert Doke of Brighton. Great Great Nephews John and Cash Crocker of Wellington, FL and Charles "Charlie"Byrne of Bolivar, and a great great niece Anna Lee Byrne of Bolivar and close lifelong friend Evelyn Holt of Bolivar. Other Extended relative and many friends. Services for Charles Johnson will be held Wednesday, March 4, 2020 at 11 AM at the Butler Funeral Home in Bolivar, MO. Visitation will be held the hour prior. Memorial contributions can be made in Charles' name to the First Christian Church of Bolivar, MO.

The family of Charles Edwin Johnson created this Life Tributes page to make it easy to share your memories.

Send flowers to the Johnson family.