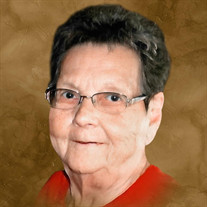 Carolyn Sue Brown, age 86, passed away peacefully on June 11, 2021, surrounded by family in Humansville, Missouri where she has lived and raised her family for many years. Carolyn was born September 7, 1934, in Cedar County, Missouri, to Benjamin Cecil Taylor and Alice Marie Taylor (Baumgardner). She was married on June 6, 1949, in Harrison, Arkansas to Donald Rex Brown. Carolyn spent many years volunteering at the Half Century Club but her favorite thing to do, besides making her family homemade chicken and noodles, was spending time at the lake, and playing pitch with the people she loved. Rex and Carolyn self-identified as “Winter Texans” as they loved to travel but especially to the south for the winter months. She was preceded in death by her husband, Donald Rex Brown, her mother, Alice Marie Taylor, her father, Benjamin Cecil Taylor her daughter- in- law, Cindy Brown, and her niece Dhan Cochran. Carolyn is survived by her best friend and sister: Bonita Kohlstaedt (Kenny), son: Danny Brown, daughters: Janet Keith (Phil), Rhonda Powell (Ed), and Bonnie Brown (Jamie Weaver) as well as many loved grandchildren and great grandchildren. The visitation will be held on Tuesday, June 15, 2021, at 1:00pm at Butler Funeral Home in Humansville, where the funeral service will also be held at 2:00pm. The burial service will be held immediately following the funeral. Carolyn will be laid to rest next to her beloved Rex (AKA ‘Sexy Rexy’) at Alder Cemetery in Stockton, Missouri. We will always carry her memory in our hearts.

Carolyn Sue Brown, age 86, passed away peacefully on June 11, 2021, surrounded by family in Humansville, Missouri where she has lived and raised her family for many years. Carolyn was born September 7, 1934, in Cedar County, Missouri, to... View Obituary & Service Information

The family of Carolyn Sue Brown created this Life Tributes page to make it easy to share your memories.

Send flowers to the Brown family.