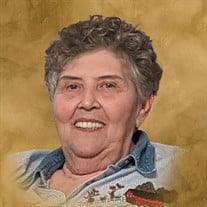 Carol Annette Freeman, 83, of Bolivar, Missouri, passed away on June 6, 2021. She was born during a blizzard at her grandma’s house in Craig, Missouri on April 8, 1938, to Maurice and Eva (Yount) Wright. She is survived by her loving husband, Jim; two children Rhonda Padgitt of Olive Branch, MS; and Jim (Leigh) Freeman of Beatrice NE. Three granddaughters Tiffany (Marty) McDonald of Minnetonka MN; Jamy Padgitt of Olive Branch, MS; and Deva Freeman of Lawrence, KS; four great-grandchildren, Jalyn and Jody Hawkins; Kaley and Brynna McDonald. She also leaves three brothers, Gerald (Linda) Wright, Ronnie Wright, and Curtis (Sue) Wright, and two brothers-in-law Dean Freeman and Donald (JoAnn) Freeman, many nieces, nephews, and other loved ones. She is preceded in death by her parents. Carol graduated from Buffalo High School in Beaumont, TX in 1956. She worked at the White House clothing store. She met her husband Jim while he was serving in the Navy, and they married in Tarkio, MO in 1957. They were stationed in San Diego, CA, and after he was discharged, moved to Trenton and then Grant City, Missouri. Carol was a homemaker following their marriage. For 24 years, they made their home in Mt. Ayr, Iowa. In 1989, they retired and moved to Missouri. Family was everything to Carol, and she was proud of her family. She put them first, whether it was taking her son fishing after kindergarten, taking her granddaughters swimming, or caring for them when they were sick. A wonderful caregiver, Carol was generous with her time and energy to help others. Carol was a Girl Scout leader and a member of bowling leagues in Iowa and Missouri. She served as a hospice volunteer. For many years, she was active in the Bolivar Christian Women’s Club. She also enjoyed the Red Hats. Carol had many talents including drawing, cooking, gift wrapping, and crafts. Memorial Services for Carol will be held 3:00 P.M. Saturday, July 10, 2021 at the Butler Funeral Home in Bolivar. Visitation will be held one our prior to the service. Memorial donations in lieu of flowers may be made to the Pleasant Hope United Methodist Church.

Carol Annette Freeman, 83, of Bolivar, Missouri, passed away on June 6, 2021. She was born during a blizzard at her grandma&#8217;s house in Craig, Missouri on April 8, 1938, to Maurice and Eva (Yount) Wright. She is survived by her... View Obituary & Service Information

The family of Carol Freeman created this Life Tributes page to make it easy to share your memories.

Send flowers to the Freeman family.