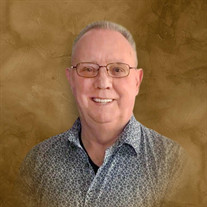 Carliss Orville Townsend passed away on Friday, August 14, 2020, after a very brief fight from complications due to COVID 19. He was 70. Carliss was born on November 8, 1949 in San Bernardino, California. He joined the Army at the young age of 17, needing his mother’s signature. He fought in the Vietnam War in 67-68. After that he enjoyed a career in law enforcement. He also worked in heavy construction. Carliss enjoyed many things in life such as his Harley Davidson and riding with his son and friends. He loved to fish with his grandkids and hooking those big fighters. But, if you asked him what the most important things in life to him were, he would tell you, God and his family. Carliss was a man of God, of strong faith, even to the end his eyes were on his prize. Carliss never met a stranger in his life. He was the friendliest guy you’d ever meet. He’d do anything for anyone. He loved meeting new people and sharing the word of God. Carliss is survived by his son, Carliss Townsend II and his wife Angel, his daughter Candy Yeargain, his two bonus daughter’s whom he raised, Tina Scalise and Sherri Carr, a whole bunch of grandchildren, and two great-grandchildren with one on the way. Brooke Townsend, Jadyn Townsend, Carliss Townsend III, Jacob Hall, Kasey and Abbey Hall, Gracie Hall, Baby Hall, Devan Hall, Jennie Yeargain, William Yeargain, Brandon Carr, Benjamin Ellis, Savannah Ellis, and Braxton Ellis. He was preceded in death by his mother, Jennie Townsend, his father, James Townsend, and his two brothers, Jimmie Townsend and Johnny Townsend, MIA. The burial services will be at Pleasant Hill Cemetery on Wednesday, August 19, 2020 at 10:00 A.M. Everyone will be asked to stay in their vehicles. Please send Memorial donations to the Pleasant Hill Cemetery, 4125 Hwy AA, Halfway, MO 65663.

Carliss Orville Townsend passed away on Friday, August 14, 2020, after a very brief fight from complications due to COVID 19. He was 70. Carliss was born on November 8, 1949 in San Bernardino, California. He joined the Army at the young age... View Obituary & Service Information

The family of Carliss Townsend created this Life Tributes page to make it easy to share your memories.

Send flowers to the Townsend family.