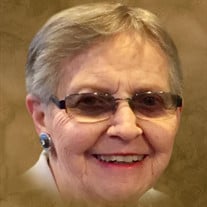 Betty Jean (Padgett) Gipson, 92, of Springfield, MO (formerly of Bolivar), passed away peacefully on Monday, March 23, 2020. Born June 4, 1927, she was the fourth of five children born to Thomas Emery and Alta O. Padgett of Mountain View, MO. Betty was a graduate of Mountain View High School, Southwest Baptist College (A.A.), Oklahoma Baptist University (B.A.), Southwest Missouri State University (M.A.) and Missouri University (Ph.D.) A lifelong teacher, she spent her early years teaching English in public schools in Mountain View and Hartville. She and her family moved to Bolivar in 1966, where she worked in public relations at then-Southwest Baptist College, before becoming an English professor for many years and retiring from Southwest Baptist University in 1991. Driven by her boundless energy and enthusiasm as a tour guide, Betty frequently pushed her student groups to the point of exhaustion (and some would claim despair), as she led them on treks around Europe. Many of her students recall these trips with Betty among the highlights of their lives. In 1997 she received SBU’s prestigious Life Service Award. She was a member of First Baptist Church in Bolivar, where she enjoyed singing in the church choir. Among many community activities, she participated in Delta Kappa Gamma; wrote feature stories for the Bolivar Herald-Free Press; directed musicals for the Bolivar Community Theatre; played tennis in the Bolivar Tennis Association; served at the Salvation Army Food Pantry, PCCSM clothing bank, and Share Your Christmas; volunteered at Community Blood Center of the Ozarks blood drives; and presented programs for Polk County Library’s Friends of the Library. Whether at a restaurant in Bolivar or at a cafe in Paris, Betty brought both her love of food and her delightful sense of humor to the table, regaling her friends and family with stories, often self-deprecating, always hilarious. In 1994-95 she and her lifelong friend and traveling companion Rose Mary Owens spent a year teaching at Northwest Normal University in Lanzhou, China. Betty was preceded in death by her parents; a daughter, Sherida Ruth Burton; and three sisters, Opal Martin, Ola Williams, and Willette Heuer. She is survived by a daughter Linda Roller and husband Doug of Springfield; a son David Gipson and wife Julie of Rogersville; a brother Tom Padgett and wife Shirley of Springfield; eleven grandchildren, Rachelle (Butler) Laux and husband Paul of Arlington, TX, Geoffrey Welch of Springfield, Emily Roller and wife Frances Pollock of New Haven, CT, William Bryson Roller of New York City, Jenna Roller of Springfield, Laney Gipson of Stuttgart, Germany, Brock Gipson of Springfield, Annie Gipson, Allie Gipson, Kadie Gipson and Kanon Gipson of Rogersville; four great-grandchildren, Michael and Camden Laux of Arlington, TX, and Shade and Drake Welch of Springfield; and a host of nieces, nephews and friends. After suffering a stroke in 2017, Betty moved to The Maples Health and Rehabilitation in Springfield, where she enjoyed the daily company of fellow residents Tom and Shirley, as well as the loving and professional care from aides, nurses, therapists and staff who work there. The family will be forever grateful for the love and care she received. A Celebration of Life will be announced at a later date due to COVID-19. Memorial contributions may be made to the Betty Gipson Outstanding Writer Scholarship at Southwest Baptist University or a charity of your choice.

The family of Betty Jean Gipson created this Life Tributes page to make it easy to share your memories.

Send flowers to the Gipson family.