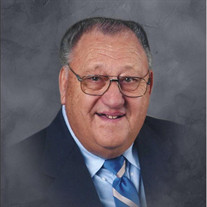 Bernard Krtek passed away August 10, 2020 at Parkview Healthcare Facility after a short illness. He was born, December 3, 1933 at the family farm near Bolivar. He was the youngest of 13 children. He attended Oak Grove 70 Country School through 8th grade and then Bolivar High School, graduating in 1953. He married Wanda Lee on December 19, 1958 in Bolivar. They celebrated 61 years of marriage together. He lived his entire life in Polk County except for two years of military service mostly in Anchorage, Alaska. He spent his early life moving houses in Rolla and Kansas City when they were clearing the right of way for I-70 and I-44. He joined the Masons in 1965 and became a 32nd Degree Mason and a Shriner in 1986. The majority of his working life was devoted to woodworking including operating his own cabinet shop for 60 years beginning in 1957. He was saved one Sunday night in the summer of 1953 at Campbell Grove Missionary Baptist Church and had a wonderful testimomy. He had attended Salem Missionary Baptist Church since 1997. He was a great story teller and we all knew the stories of growing up on the farm with many siblings and good times even if they were hard times. Most involved a pig, egg, kitten or cow and he told them with much laughter until it brought him to tears. In more recent years, the grandchildren's stories of him involved air hoses, four-wheelers or his slow motion falls, laughing before he ever hit the ground. He is survived by his wife, Wanda of the home; sons, Rex Krtek and Gary and Kahlie Krtek all of Bolivar; four grandchildren, Amanda and Brian Bays of Bolivar, Barrett and Chelsea Krtek of Rogersville, Garrett Krtek, and Kaleb Krtek of Bolivar; two great-grandchildren, Westin Bays and Addison Krtek, a sister Marian Whitney of California; sisters-in-law, Eva Krtek of Carthage, Pat Lee of Indiana and Betty Kukal of Kentucky; and many neices and nephews. A Funeral will be held for Bernard at 10:00 A.M. on Tuesday, August 18, 2020 at Butler Funeral Home in Bolivar. Friends & relatives are invited to a Visitation with the family from 5:00-7:00 P.M. at the funeral home the evening prior, August 17, 2020. Burial will follow the services in Greenwood Cemetery in Bolivar.

Bernard Krtek passed away August 10, 2020 at Parkview Healthcare Facility after a short illness. He was born, December 3, 1933 at the family farm near Bolivar. He was the youngest of 13 children. He attended Oak Grove 70 Country School... View Obituary & Service Information

The family of Bernard Krtek created this Life Tributes page to make it easy to share your memories.

Send flowers to the Krtek family.