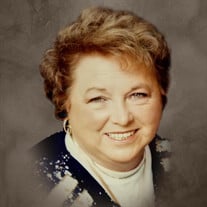 Arleen Dawn Ferguson, 82, Bolivar, MO passed away peacefully at home Monday, April 12, 2021 at 10:07 AM from complications of heart and kidney failure. Her caregiver, Kim Payne, was by her side, praying with and singing, “Amazing Grace” to her. She was born September 30, 1938 in Sedalia, Missouri, the only child to James S. and Lucille A. Hanning. While attending Smith-Cotton High School, she met and began dating Larry K. Ferguson, one year her junior. Following high school, they both attended Central Missouri State University where Arleen earned her Bachelor of Science in Education in 1960 and Master of Education in 1962. She and Larry married in 1961. Following graduation, Larry’s job took them to Olathe, KS then to Raytown, MO, where Arleen found employment teaching elementary children. Their first son, Mike was born in 1965. Years later, they relocated to Bolivar, where Marc was born in 1968, followed by Amber in, 1971. Arleen became a substitute teacher in the Bolivar schools before opening and operating Amber’s Children’s Shop. As the kids grew, she became and active supporter of the Bolivar Booster Club, PTA, Director of Share Your Christmas, Regional President of AFS, volunteer of Release-Time Bible Study, and served two years as Alderman for Ward 2. In later years, Arleen loved watching the birds that would come to her feeders, spending time with her grandchildren, putting together puzzles, enjoying timeshare trips to Branson and across the country with her best friend Ann Davis, and occasionally joining Amber at various locations where she worked as a travelling nurse. She was an avid fan of Jimmy Buffet, the Kansas City Chiefs, and the St. Louis Blues. She was a longtime member of Bolivar Assembly of God and Highway Assembly of God in Brighton, where she found a strong family in Christ. She will be remembered for her faith in God, her selflessness, generosity, and the joy she had in her family. She is survived by her three children, Mike (Pam) Ferguson of Clinton, MO; Marc Ferguson of Bolivar, MO; Amber Ferguson of Springfield, MO; grandchildren Shane, Hannah, Mallorie and Ryan Ferguson; and cat, Sophie. She is also survived by numerous friends that she loved like family. Services for Arlene will take place at 11:00 AM on Friday, April 16, 2021 at Butler Funeral Home in Bolivar, with visitation from 10:00 AM to 11:00 AM. Interment will take place at 11:00 AM on Saturday, April 17, 2021 at the Memorial Park Cemetery in Sedalia, Missouri. The family wishes to thank all who cared for her in her time of need. Sutton in-Home Senior Care and Good Shepherd Hospice, and asks that memorial contributions be made to Gideon's International.

Arleen Dawn Ferguson, 82, Bolivar, MO passed away peacefully at home Monday, April 12, 2021 at 10:07 AM from complications of heart and kidney failure. Her caregiver, Kim Payne, was by her side, praying with and singing, &#8220;Amazing Grace&#8221;... View Obituary & Service Information

The family of Arleen Ferguson created this Life Tributes page to make it easy to share your memories.

Send flowers to the Ferguson family.