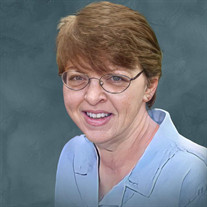 Patricia Ann Ladd, 64, of Bolivar, Missouri, passed away on Monday, July 5, 2021. She was the widower of Rex Alan Ladd. They shared 35 years of marriage. Ann was born to Wanda Hocker and Charles Watts in Lebanon, Missouri on May the 6th, 1957. She attended and graduated from Bolivar High School in 1975. She went on to attend classes at Southwest Baptist University. During her time of employment, she worked at Hegles, CMH, and Polk County Mutual Insurance. She also spent a number of years assisting her mother Wanda with her trucking company. She had a deep love of music which she fully passed on to her son, and subsequently to her grandchildren. There's too many to list, but the main staples were always ZZ Top, Huey Lewis, Journey, George Thorogood & the Destroyers, The Doobie Brothers, The Beach Boys, and many, many more. A relatively new passion in her life she had found was for her grandchildren. She jumped at every chance to laugh with them, play with them, and teach them. She is preceded in death by her husband Rex Ladd, A sister Connie Roan, Mother -in-law Mildred Irene Black, Father in-law Robert Ladd along with father in-law Thomas Black, and 1 brother-in-law, Charles Krtek. She is survived by her Mother Wanda Carol Hocker, Her Son Ryan Alan Ladd and Daughter in Law, Victoria Jean Ross, 3 grandchildren, Easton Edward Dryer, Lillian May Ladd, and Elijah Alan Ladd. Her sister Cheryl Harbourn and Husband Orville, her sister-in-law Brinda Bridges and Husband Carl,Her Nephew Curtis Krtek, Niece Angela Griner and her husband David along with several other relatives and friends. Ann will be remembered for her abundance of love she had for her family and friends. She never knew a stranger and loved all those around her totally and completely. If she was ever needed, in any sort of situation, whether it be council, advice, a shoulder to cry on, a friend to laugh with, or just when good company was needed, she didn't hesitate and she was there, in whatever way she was needed. She was always a phone call away. A visitation is scheduled for Tuesday, July 13, 2021 at the funeral home from 5:00 PM to 7:00 PM Funeral services for Patricia will be held at 10:00 AM on Wednesday, July 14, 2021, at Butler Funeral Home in Bolivar.

Patricia Ann Ladd, 64, of Bolivar, Missouri, passed away on Monday, July 5, 2021. She was the widower of Rex Alan Ladd. They shared 35 years of marriage. Ann was born to Wanda Hocker and Charles Watts in Lebanon, Missouri on May the 6th,... View Obituary & Service Information

The family of Ann Watts Ladd created this Life Tributes page to make it easy to share your memories.

Patricia Ann Ladd, 64, of Bolivar, Missouri, passed away on Monday,...

Send flowers to the Ladd family.