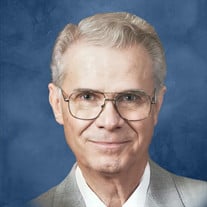 Alvin Roy Tinsley, 79, of Bolivar, Missouri passed away on July 8, 2021, at Citizens Memorial Hospital in Bolivar, Missouri from complications related to Covid-19. He was born at George Dimmitt Memorial Hospital in Humansville, Missouri, to Eugene and Mary Ruth (Lacy) Tinsley. Alvin’s first six years of education was taken at the one room Cedar Grove Elementary School near Humansville. Cedar Grove was consolidated into the Humansville school district just before his seventh grade year, and he went on to graduate from Humansville High School. Math was always his favorite subject. He attended college at Southwest Missouri State College – now Missouri State University – to become a secondary school mathematics teacher. After college, he taught junior high math, and went on for higher education. He retired in 2004 as a math and computer science professor at the University of Central Missouri where he taught for 36 years. Alvin was saved at the age of 35 and joined New Hope Baptist church in Clinton, Missouri. He was later ordained in the church as a deacon. When he and Ida retired, they moved to Bolivar and became members Southside Missionary Baptist Church. He remained a deacon at his new church home and was faithful for the remainder of his life. Alvin was a lifelong wood carver and loved making gifts for family and friends. He loved to travel with Ida to see different parts of the country and especially loved the cruises they took to Alaska. He was a runner in his younger years and later took up biking. He especially loved spending time with his grandson, Julian. Alvin is survived by his wife of 56 years, Ida; his daughter, Janet Tinsley and her husband Jeremiah Mcharo, of Kansas City, Missouri; his grandson, Julian Kiwinda, of Charlottesville, Virginia; his brother John Tinsley and his wife Karen of Humansville, MO; his sister, Sue Jenkins and her husband Larry of Humansville, Missouri; and several beloved nieces, nephews, and cousins. He was preceded in death by his parents, Eugene and Mary Ruth Tinsley. Services for Alvin will be held on Saturday, July 14, 2021 at 10:00 AM at Butler Funeral Home in Bolivar. In lieu of flowers the family has requested that donations may be made to the Asthma and Allergy Foundation of America. The family has also requested for everyone to please wear a mask while attending the service.

The family of Alvin Roy Tinsley created this Life Tributes page to make it easy to share your memories.

Alvin Roy Tinsley, 79, of Bolivar, Missouri passed away on July...

Send flowers to the Tinsley family.