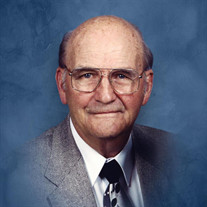 Albert Richard Moore, 95, of Bolivar, MO passed away on Saturday afternoon, May 23, 2020 at Citizens Memorial Healthcare Facility in Bolivar. Richard was born on July 31, 1924 in Cantril, IA, the son of Charles E. and Maude (Shaw) Moore. The family lived in Cantril until 1935 when they moved to their farm north of Buffalo where Richard lived with his family until he entered the military. In November 1943, he entered into the U. S. Navy and served as a radioman in the Asiatic-Pacific Theater, participating in the liberation of the Phillippine Islands. After he received his Honorable Point Discharge he returned home to Buffalo. Richard met Gladys Bell and they married April 1946 after a short courtship. The couple enjoyed over 74 years of marriage. Two daughters, Shirley and Donna were born to this marriage. Gladys survives. Richard was saved at the age of 29 and was an active member at Arvada First Baptist Church until moving back to this area in 1982. He was an active member at First Baptist Church in Bolivar until his health began to fail. Richard worked many jobs throughout his life, but was mainly a Master Carpenter by trade, a job which he was singularly suited for given his size and stature. Upon retirement, Richard and Gladys moved from the Denver, CO area to Rondo where his dreams of having a small farm were fulfilled. They lived on the Rondo farm for about two decades. In retirement, Richard also worked on several projects for Killian Construction, was an inspector for the City of Bolivar, and at the age of 79, began selling real estate. He was preceded in death by his parents, his three brothers, Wayne, Max and Howard Moore, and his sister, Norma Brownlee. In addition to his wife, Richard is survived by two daughters, Shirley (Chuck) MacLaughlin of Bolivar and Donna Moore of Hartville; two grandsons, Jeremy (Angela) MacLaughlin and Chad (Melanie) MacLaughlin; four great-grandchildren, Nathan, Anna, Logan, and MacKenzi and many nieces and nephews. A Funeral will be held for Richard at 11:00 a.m. Thursday, May 28, 2020 at Butler Funeral Home in Bolivar. Friends and relatives are invited to a Visitation with the family one hour prior to the service at the Funeral Home. Burial will follow services in Greenwood Cemetery in Bolivar. Memorials in honor of Richard’s life may be made to the Missions Fund at First Baptist Church of Bolivar.

Albert Richard Moore, 95, of Bolivar, MO passed away on Saturday afternoon, May 23, 2020 at Citizens Memorial Healthcare Facility in Bolivar. Richard was born on July 31, 1924 in Cantril, IA, the son of Charles E. and Maude (Shaw) Moore.... View Obituary & Service Information

The family of Albert Richard Moore created this Life Tributes page to make it easy to share your memories.

Albert Richard Moore, 95, of Bolivar, MO passed away on Saturday...

Send flowers to the Moore family.